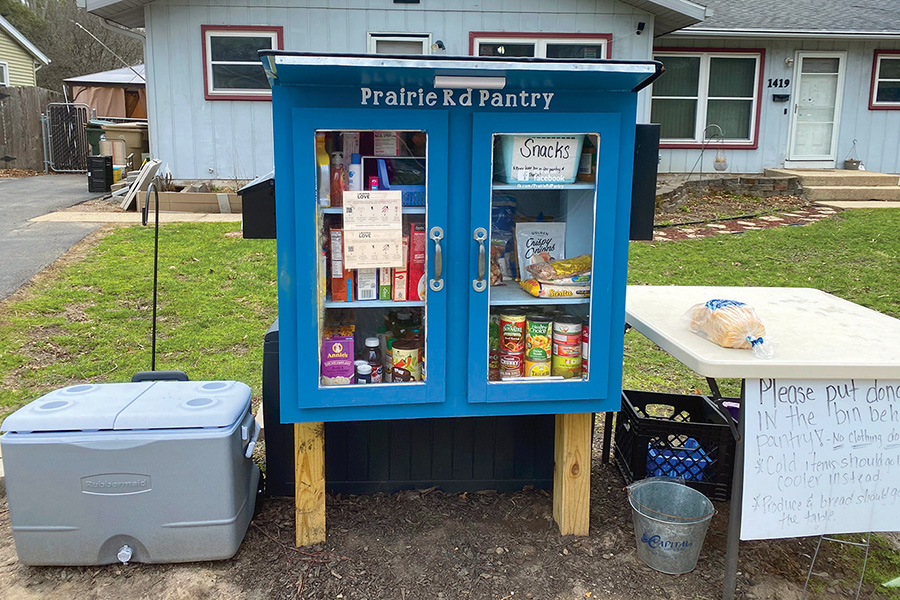 When Nicki Stapleton set out a cardboard box on her front lawn two years ago, she had no idea she was starting a grassroots campaign.

The box was filled with canned and boxed food, and leftover donations from her neighbors after she and her husband asked for food for a recently homeless man. When the food started pouring in and they realized they had too much for just one person, they put the leftovers in a box outside their home for anybody to help themselves.

The disposable box quickly turned into a bookshelf, later replaced by a more sturdy and durable cabinet crafted by a donor from a design Stapleton made.

What started as an effort to distribute extras has evolved into a robust daily stocking and restocking of the Prairie Road Pantry to keep up with the ongoing food insecurity and growing community involvement.

Stapleton admits it’s exploded. The Prairie Road Pantry donations often resemble a Thanksgiving cornucopias. On Sundays, she receives donations from a local Hy-Vee supermarket and Mondays are “Produce Day.” The fruits and vegetables are sent through Instacart by a generous anonymous donor, who’s been ordering the produce once a week since shortly after the pantry started.

The snapshot of food insecurity is not a one-size-fits-all picture, with most people seeking assistance coming from all walks of life. Most recipients utilizing the pantries have overlapping needs. They may have recently lost a job and are learning to adjust to limited income, they might be able to afford food but never seem to have enough or they may be experiencing a usual time of financial need.

Based on the “Little Free Library” system, which promotes neighborhood book exchanges in the form of a public bookcase, ”Little Free Pantry” was founded by Jessica McClard in 2016. Since then, back or front yard pantries are growing throughout the country.

In the spring of 2016, McClard installed her first mini-pantry in Fayetteville, Ark. Within two weeks, a stranger found inspiration in her idea had copied the idea and opened a second pantry across town.

To date, there are more than 800 Little Free Pantries registered on the official website, although the founder believes there are many more untracked or unlisted.

With conventional and community food pantries throughout the country, what is the appeal of a small neighborhood pantry where the items might change day each day and there is less of a supply?

Little Free Pantry recipients don’t have the burden of filling out paperwork like they would at a traditional non-profit pantry. Also, a Little Free Pantry doesn’t have set geographical boundaries so that they can serve a larger population. They are 24/7 resources, unlike traditional pantries with set regular hours, so recipients can access the free pantry any time they’re hungry.

For Stapleton, the need to get the word out and build awareness of the food resource is paramount. Every day, after she stocks the pantry, the Prairie Road Pantry founder is quickly to inform her community via the pantry’s Facebook page.

While most people or organization post on social media as an opportunity to promote themselves or their brand, Stapleton steers clear of boasting or pridefulness. She uses Facebook to inform and update the pantry’s followers.

Her posts are informative and matter of fact. Believing the Facebook page follower have the need and would like to know what the pantry has in stock, Stapleton post at least once and sometimes twice a day. She also knew the key to receiving donations from the community was to maintain visibility.

“It doesn’t take much time [to post on Facebook]. I make sure to snap a picture when I stock and quickly post it on the page. It takes just a few seconds,” Stapleton said.

To create an area of frequently asked questions, Stapleton created a pinned post that lists the often requested food. Hygiene products, baby wipes and cleaning products are often requested; many families struggle to afford these items and other food assistance programs like SNAP don’t cover them. The most popular food donations are: crunchy peanut butter, Kraft or Annie’s macaroni and cheese and bagged sides or snacks and meal kits.

While canned and boxed food are her most popular donations, others donate gift cards or cash. Stapleton uses monetary donations to fill in gaps when items are needed.

The line starts outside her home, usually minutes after she posts on Facebook. Regulars drive up, some on their bikes, with some arriving after daylight to remain anonymous.

While she works for the City of Madison full time, with two days working from home, it is often suggested to her that she take her talent and turn it full time into her own not-for-profit. Stapleton dismisses the idea, saying she loves her full-time job and enjoys the flexibility of not being a non-profit and working the pantry into her own schedule.

There have been many vibrant memories during the past two years, but one of the most memorable experiences was running a school supply drive two summers ago. Stapleton says it was a ton of work, with supplies scattered throughout her home. But with community effort, Prairie Road Pantry created backpacks for 70 students, plus leftover supplies and backpacks. It was a huge hit, being able to offer other free things including toys, clothing and books. In addition, The Book Deal, a local book store, donated a bunch of kids books which was a huge hit.

What Stapleton wants the community to know is that food insecurity is a cross demographic need, with recipients coming from all walks of life. The most important thing for people to know is her adamant belief that pantries should be judgment free zones.

“You never know when you might need a little extra help. I have had people message me through the pantry page thanking me for having the pantry available at night as they are embarrassed to come when it is daylight,” Stapleton said.

“I would also like people to know that people who are experiencing food insecurity shouldn’t be shamed for their preferences. Anyone who follows the page has seen that I frequently request specific brands of macaroni and cheese. I have seen a preference given to those brands and the generic options don’t get taken as quickly. And that is OK. I do not like the ‘beggars can’t be choosers’ mentality – everyone deserves food dignity and choice. People using a pantry shouldn’t have to settle for food that expired 5 years ago, dented cans and brands they don’t like. Food should be enjoyed, no matter where it came from.”