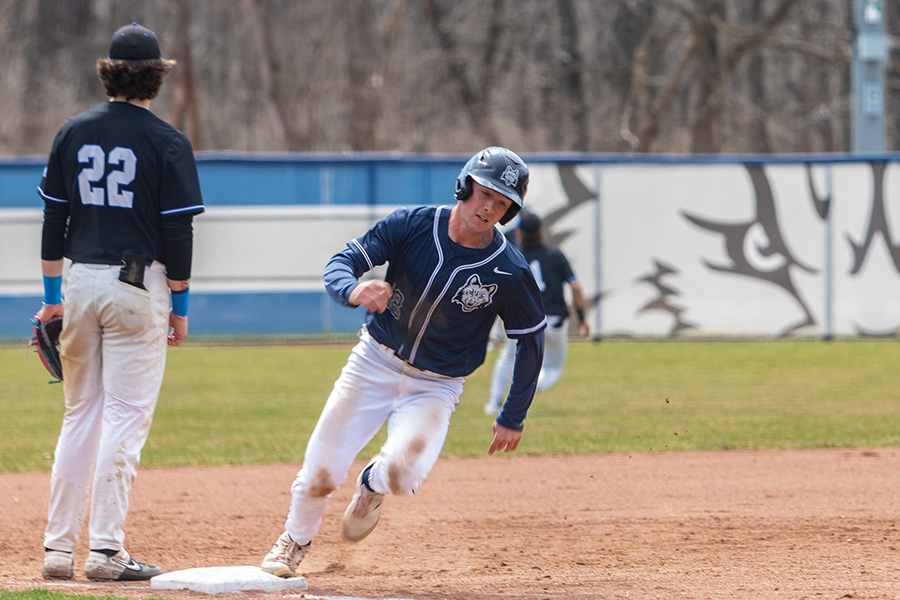 ANDRES SANCHEZ / CLARION Madison College’s Spencer Bartel rounds third base on his way to score during a doubleheader against Bryant & Stratton College at home on April 12. The WolfPack baseball team posted wins of 12-2 and 9-4.

The WolfPack now boast an impressive 23-3 overall record and are 5-1 in conference play. With four conference games left, they are currently on top of the conference standings.

Madison College scored five runs on six hits in the game, led by doubles by Spencer Bartel and Jake Fulton.

The second game of the doubleheader was a 10-0 five inning shutout win thanks to the combined efforts of Carson Fluno, Kellan Short and Chris Byhre, who held Rock Valley to just four hits combined. Fluno earned the win, allowing just one hit in three innings with five strikeouts.

Madison College scored its 10 runs on nine hits. Gabe Roessler had two hits and four RBIs in the game, while Brady Jurgella added two hits including a double.

A six-run second inning keyed Madison College’s 11-0 five-inning victory over Waubonsee at home on April 15. Hayes and Arndt combined for a one hit shutout, with Hayes earning the victory on the mound. Zach Storbakken, Gunnar Doyle and Jake Fulton led the WolfPack with two hits each.

The second game of the doubleheader saw Madison College pound out 12 hits in a 12-2 five-inning victory over Waubonsee. Fulton led the WolfPack with three hits, including a triple, while Roessler and Cameron Dupont both added two hits. Spencer Buskager pitched the win, allowing two runs on three hits.

A 13-hit effort led Madison College to a 9-4 victory at home against Bryant & Stratton College on April 12. Bartel had three hits, including a home run, to lead the WolfPack. Luke Hansel pitched six innings, earning the win, allowing four runs on four hits.

Eli Hoyt pitched a two-hit shutout as Madison College defeated Bryant & Stratton College 10-0 in the second game of a doubleheader. The WolfPack had 13 hits in the game, led by Storbakken, who had two hits, a home run and three RBIs.

Madison College suffered its first conference loss of the season, falling to host Milwaukee Area Technical College, 3-1, on April 11. The WolfPack was held to just three hits in the game.

A four-run fifth inning secured the win as Madison College defeated Milwaukee, 7-2, in the second game of a doubleheader. Carter Stebane had two hits in the game, while Storbakken, Hansel and Gabe Roessler each had doubles.

Madison College jumped out to a 4-0 lead and then held off Carl Sandburg for the 5-2 victory in the second game of a doubleheader. Carter Stebane led the WolfPack with two hits, two RBIs and one run scored.