Madison College baseball off to one of its best starts 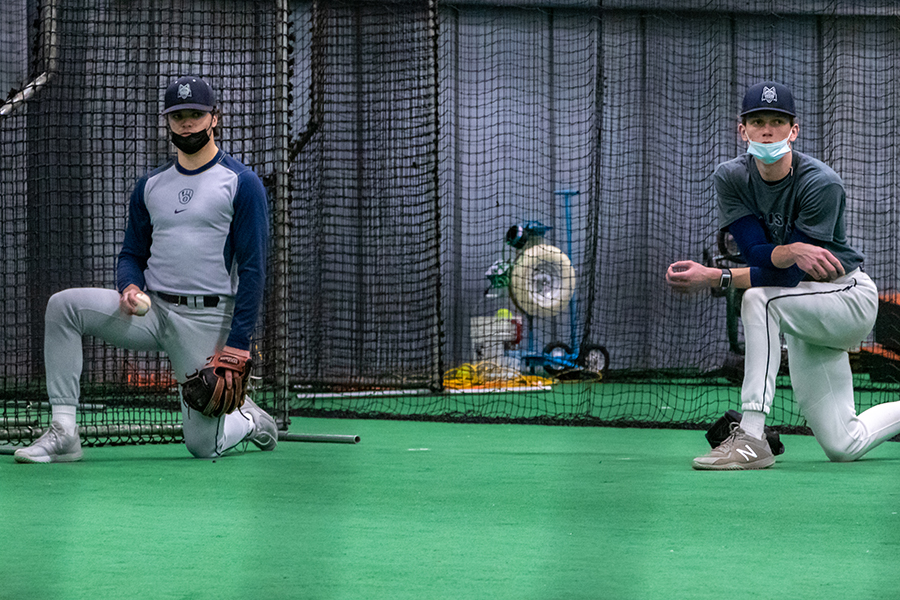 Madison College baseball players stretch at the start of a recent practice held at the GRB Academy facility in Deforest.

One thing is clear after the Madison College baseball team’s spring break trip to Arizona – this team can score runs, and a lot of them.

The WolfPack scored 10 or more runs in each of their first seven games, all victories, before being “held” to six runs in their one loss.

Madison College, which has made three straight trips to the NJCAA Division II World Series, is currently ranked No. 4 in the Division II poll and is off to one of its best starts ever.

Madison College’s bats took until the fifth inning to warm up, but a seven-run inning helped propel the WolfPack to an 11-8 victory over Chandler-Gilbert on March 10. Eli Kramer led the WolfPack with three hits, while Jake Nelson and Cameron Dupont added two hits.

Jett Thielke and Spencer Buskager combined for a three-hit shutout victory for Madison College, which won the second game of the doubleheader, 10-0. Zach Storbakke had a home run and a triple to lead the WolfPack hitters.

Gunnar Doyle opened the scoring with a two-run home run in the first inning as Madison College dominated for 10-1 win over Mesa Community College in eight innings on March 11. Jake Nelson also had a big game, with three hits, including two doubles.

Madison College scored 21 runs on 18 hits in a 21-2 victory over Riverland Community College on March 12. Brady Jurgella had a home run and joined Nelson and Kramer with three hits each. Isaiah Cerfus pitched the win, allowing two runs on three hits in four innings.

A big seventh inning helped boost Madison College past Miles Community College, 14-11, after a back-and-forth offensive battle. Doyle had four hits in the game, including a double, and scored three runs to lead the WolfPack.

After taking an early 6-0 lead, Madison College was able to hold off Western Nebraska for a 10-6 victory on March 13. Kramer and Doyle both had three hits in the game and scored twice. Doyle let the team with four RBIs.

Two big innings was all it took for Madison College to beat Williston State College, 14-4, on March 15. The WolfPack scored six runs in the third inning and seven runs in the fifth inning. Jurgella led the team with three hits, including two doubles. Storbakke and Gabe Roessler both hit home runs.

Lake Region scored six of the final seven runs to rally for a 8-6 win over Madison College in a nine-inning game of March 15. The WolfPack was led by Gabe Roessler and Jurgella, who had two hits in the game.

A four-run fourth inning provided Madison College the boost in needed for an 8-1 victory over Gateway Community College on March 16. Storbakke had two hits, including a home run, and three RBIs to lead the WolfPack. Doyle added four hits, including a triple.

Madison College raced out to a 7-0 lead after two innings and then held off Scottsdale for a 9-3 victory on March 17. Spencer Bartel, Kramer, Nelson and Doyle each had two hits in the game.