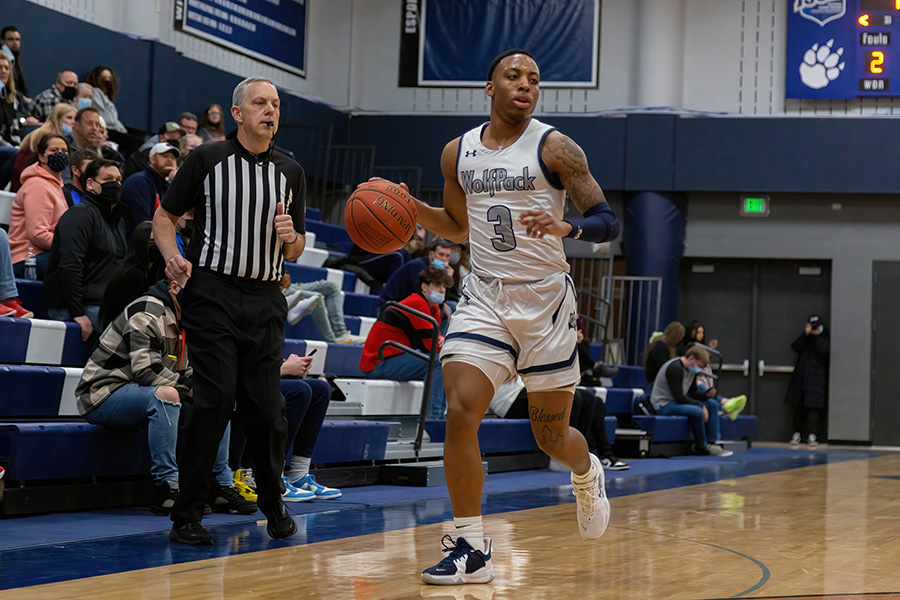 A remarkable rally provided a memorable night for the Madison College men’s basketball team, as it came back from a 20-point second-half deficit to defeat the College of DuPage, 62-57, at home on Feb. 10.

But if the halftime ceremony honoring them was somewhat muted by the WolfPack’s 31-17 deficit, the team’s second-half surge was something worth celebrating.

Madison College’s rally started after DuPage extended its lead to 20 points with 15 minutes and 18 seconds left in the game.

From that point on, Madison College outscored DuPage 39-14 to close the game. Freshman Keith Hoffman drilled a three-pointer with 41 seconds left to give the WolfPack at 57-55 lead, completing its frantic rally.

Madison College then hit 5 of 6 free throws to close the game, while coming up big on the defensive end. DuPage was held to 0 for 3 shooting in the final seconds, including a huge blocked shot by Reed that prevented a game-tying basket with 31 seconds left.

Hoffman led the WolfPack with 19 points and five rebounds. He hit two-big second half three-point baskets to help his team complete its rally. Curothers was the only other player to score in double figures, netting 12 points.

Madison College is now 16-9 overall and 4-5 in conference play. The NJCAA Region 4 Tournament begins play on Feb. 19, with the higher seeded teams serving as game hosts.

Only two players scored in double figures for the WolfPack. Liggins and Nik Feller both scored 11 points in the game, while Hoffman and Telin Porter both added eight.

Cold shooting was too much for Madison College to overcome in its 78-51 loss at Rock Valley College on Feb. 8.

Hoffman had 14 points and 13 rebounds to lead Madison College. The only other players to score in double figures for the WolfPack were Curothers, who added 12 points, and Reed, who scored 10.

Visiting Madison College stayed close in the first half, but couldn’t keep up in the second half as it lost to Milwaukee Area Technical College, 99-78, on Feb. 3.

Madison College set a new season high with 11 baskets from 3-point range during the game, including six by Hoffman, who led the team in scoring with 22 points.

Liggins was perfect from the field, hitting all six of his shots including two 3-pointers to score 14 points.

Curothers was the only other Madison College player in double figures, scoring 11 points.