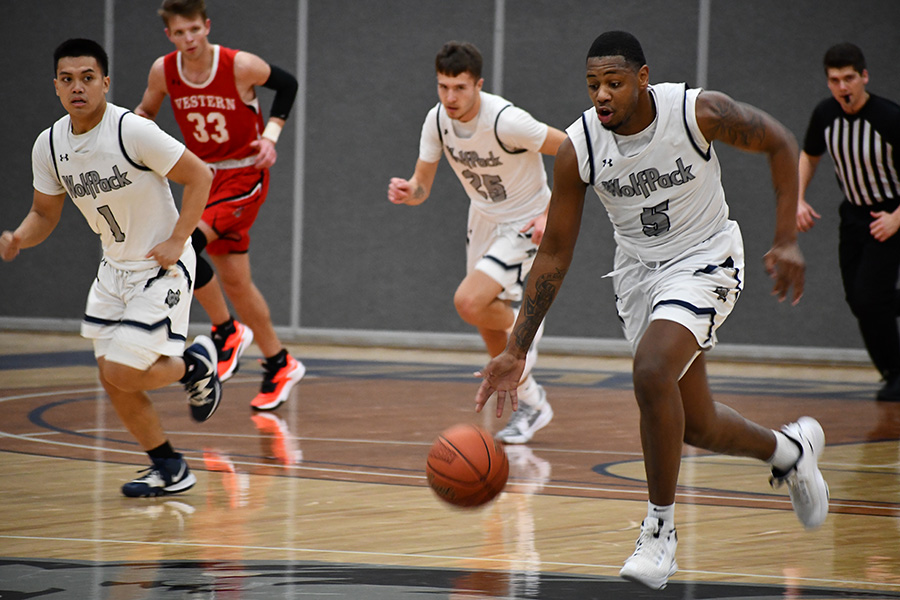 Madison College guard Telin Porter (5) brings the ball up court during a recent home game. The WolfPack men’s basketball team has won six straight games as it prepares for the start of conference play.

The Madison College men’s basketball team returned from its holiday break in the same way it entered it – by winning three straight games.
Prior to the holiday break, Madison College posted victories over UW-Richland, Loras College JV and Kishwaukee College.
Since the new year, the team has beaten Bay College, Gogebic Community College and Bryant and Stratton College.
The six-game win streak is the team’s longest of the season and has improved their overall record to 12-4 as it prepares for conference play.
In their most recent victory, visiting Madison College rallied from a 20-point halftime deficit to beat Bryant and Stratton College, 73-70, on Jan. 11.
Madison College opened the second half with a 36-16 run to tie the game at 62 with just over six minutes left to play. The big run was fueled by strong defense that forced multiple turnovers and solid shooting, including four 3-point field goals.
The WolfPack closed out the back-and-forth game by sinking six of eight free throws in the closing minutes.
Keith Hoffman and Cortez Telfered both scored 16 points to lead the WolfPack, while Malcolm Reed added 14 points and Telin Porter added 10.
Madison College got plenty of scoring from its non-starters in a 62-51 victory over Gogebic Community College on Jan. 8. The WolfPack bench outscored its opponent’s bench, 34-0, in the game to help propel the team to victory.
Telfered led the WolfPack with 19 points, hitting four of his six 3-point shots. Hoffman added 11 points and seven rebounds in the game.
A nine-point run in overtime keyed visiting Madison College’s 82-76 victory over Bay College on Jan. 7.
Hoffman accounted for five of the points during the run and finished with a career-best 28 points. He also had 11 rebounds in the game. Arrioin Curothers added 12 points, while Trevon Liggins scored 10.
Madison College plays an exhibition game against the Madison Mavericks on Jan. 15 before opening conference play at home against Milwaukee Area Technical College on Jan. 18. Following that game, the WolfPack will host Rock Valley College on Jan. 20.

Women’s basketball
The Madison College women’s basketball team had a tough return from holiday break. First, the team had two games cancelled due to the pandemic. Then it was walloped by Bryant & Stratton College in its first game in more than a month.
Bryant & Stratton handed visiting Madison College one of its most lopsided losses, defeating the WolfPack, 130-41, on Jan. 11.
The WolfPack was shorthanded for the game, with all five starters playing the entire 40 minutes. Taylor Ripp led the team with 18 points, while Olivia Marron added nine.
Madison College is now 2-11 and opens conference play at home on Jan. 18 against Milwaukee Area Technical College. Rock Valley will visit Redsten Gymnasium on Jan. 20.