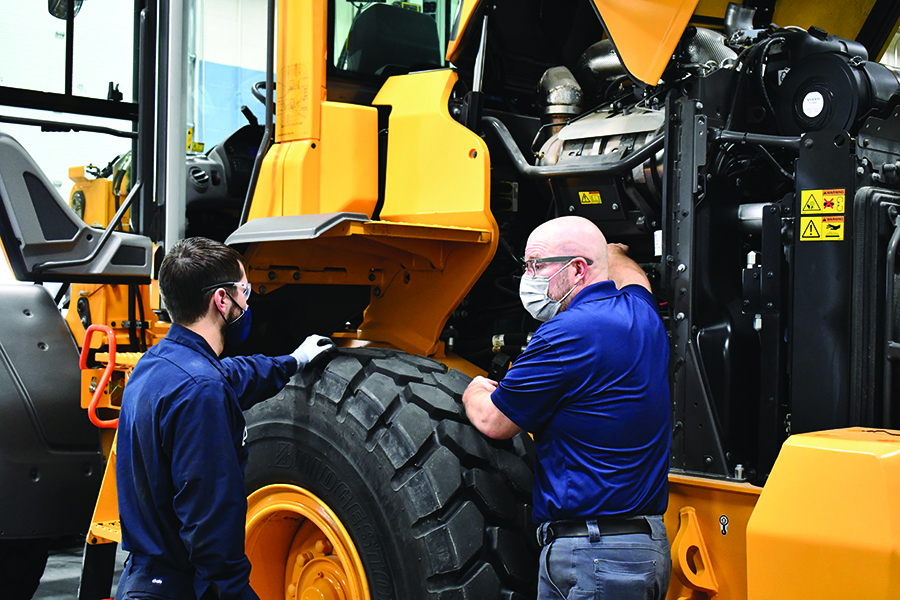 For the third time in history, the U.S. will be competing on the world stage against elite trade experts of Heavy Vehicle Maintenance at WorldSkills. From Oct. 12-17, Gabe Krebs will be representing the U.S. in Shanghai, China. Tom Wozniak, a full time Diesel Technology instructor at Madison College, is part of the coaching staff that has been training Krebs.
“WorldSkills is basically the Olympics of skilled competition,” said Wozniak.
In order to qualify for WorldSkills, Krebs had to qualify with SkillsUSA. SkillsUSA was founded in 1965 with the goal of ensuring America had a skilled workforce. There’s an expansive list of services that are trained including: barbering, cabinet making, dental assisting, t-shirt design and much more. More than 333,527 students and instructors are served annually, according to the SkillsUSA website. Membership can be started as soon as 13 years old.
From various SkillsUSA chapters across the country, three have been selected to represent the US this year in different categories. Krebs, a graduate of Dakota County Technical College Graduate, found success at local competitions in Minnesota, then at the national level. This earned him a spot on Team USA where he then beat two other competitors to be chosen to go to China.
“A young student like this coming in and having an opportunity of a lifetime to represent his country and compete against the best of the best in the world, what an honor,” said Wozniak.
While Wozniak is involved with SkillsUSA as a state director of the postsecondary side of things, he has been coaching Krebs for many months. Before coaching Krebs, Wozniak coached and travelled with a student to Russia, returning with a bronze medal.
WorldSkills was founded in 1946. The U.S. didn’t join until 1973 when President Nixon recognized SkillsUSA as the official representing organization.
The competition is held every two years in different parts of the world, in similar fashion to the Olympics. As far as age constraints go, competitors must be 22 years old or younger during the year of competition. Only four categories have a differing age limit of 25 years old.
Over the four days of competition, Krebs will be repairing various machines with a time limit. He’ll have to figure out what is wrong with the machine and get it back in working order. Each station is three hours long with a total of seven stations with one half day to rest.
During this training time at Madison College, Krebs has gone through some mock competitions.
“You got to keep [your] mind straight and if you make a little mess up, I mean, the biggest thing is being able to shake it off and continue on at the next station,” said Krebs. “Maybe one you sink on a little bit, but the next one doesn’t mean you can’t rock it and bring home more points.”
In other parts of the world, the competition will be streamed on TV and is a highly publicized event. For those watching from the U.S., it can be watched from the WorldSkills website.
There are many differences in how the U.S. approaches WorldSkills compared to other countries. Wozniak believes that there should be changes to how the U.S. approaches the competition, from an individual level all the way to the federal level.
“When we were in Russia, we had TV crews all over the place filming different things, but it was not seen here,” said Wozniak. “But as far as support and stuff is concerned, the U.S. government doesn’t support us. You know again, all these other countries that are part of WorldSkills, over 90% of them are supported 100% by their government. We are 100% funded by industries, you know, by Corporate America…and we need help.”
Another change that Wozniak sees necessary to make is how trades are seen by the general public.
“The downside with our country is that we put so much emphasis on our athletes…We put those people on a very high pedestal. Why aren’t we doing that to these individuals here who are in the skilled trades? Because it’s just as important, right?” said Wozniak. “It may not be as sexy, but it’s still as important. As Americans, we should be just as excited.”
Wozniak also noted the difference in training for skilled trades. In other countries, training for WorldSkills can begin as soon as eight years old, which isn’t the case in the U.S.
“We’re trying to really make the United States aware that hey, this is something and it’s very important. Especially now when we have such a huge skills gap, why wouldn’t you be excited about this?” said Wozniak.
Just by qualifying for the competition, Krebs will be showcasing the importance of the trades and the diesel industry to the U.S. Being the third to represent the U.S. in this category is already an accomplishment in and of itself, but Krebs has high expectations.
“All hopes are to bring home another medal and make sure it’s not a fluke for the U.S. to be on a podium again, and be able to keep that rhythm going for years to come,” said Krebs.