Making the team just part of the battle 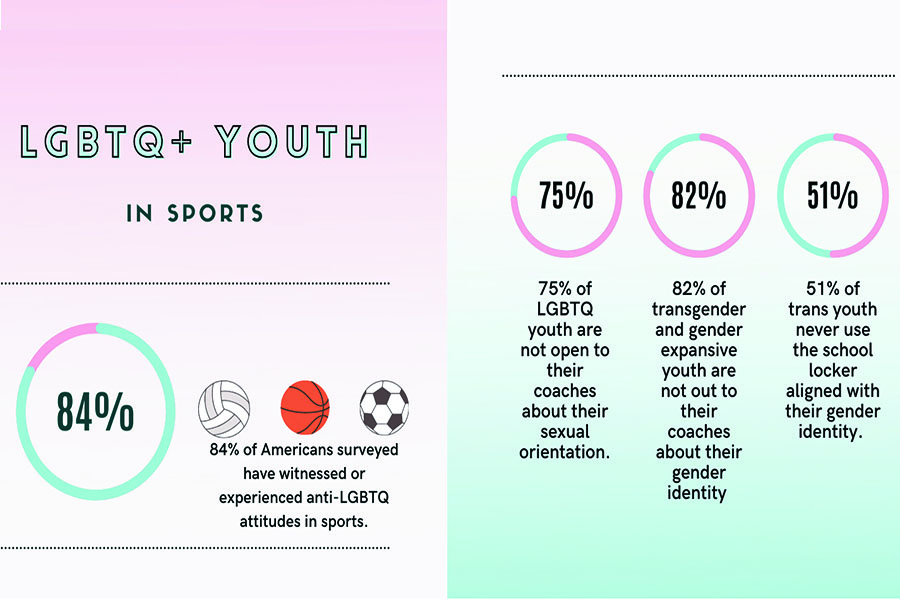 Information found in a study done by the Human Rights Campaign in 2017.

As exciting as sports are, there are also times where it’s hard. Outside of just the athletic aspect, LGBTQ+ athletes have an entirely different experience. They have to go through the same things as everyone else: tough practices and disappointing games, but also have to experience extra hardships. Things like concerns about being accepted by their teammates, digs from opponents or fans and fear of being harmed are common.
When it comes to queer acceptance, Wisconsin is lacking. The House of Representatives has proposed the Protecting Women in Sports Act. The bill would only allow those who were assigned female at birth to compete in women’s sports. It would limit those in public sports from kindergarten all the way up to public colleges. There’s been a lot of support throughout the state and 28 co-sponsors on the bill.
Gov. Evers, who hasn’t shown support for the bill, tweeted “My message to Wisconsin’s transgender kids and students today is simple: I see you. You are welcome, you are wanted, and you belong.”
Even though there has been pushback against the bill in Wisconsin and the other states where it’s been introduced, bills like this being written and met with support demonstrates the lack of support for gay athletes.
While much of the public discourse regarding queer athletes is negative, that doesn’t dictate everyone’s experience.

Athletes are athletes
Take Paisley Bennett, a current member of Madison College’s esports team. During her time with the team, Bennett hasn’t experienced any homophobia from her teams or opponents.
Bennet uses the label of gay because “I just, I like girls. I don’t know…the word lesbian; it’s just weird to me. I’m like, I’ll say gay versus lesbian.”
While this is Bennett’s second year as an athlete at Madison College, her athletic history goes back several years.
Upon graduating, she played softball at North Central University, located in Minneapolis, Minnesota. It is a private, Division 3, Christian college. During her years there, she played mostly as an infielder.
At the time, she wasn’t out to her teammates. Instead, she was taking time to figure herself out and wasn’t dating anyone so she could focus on herself more.
However, when Bennett moved on to her next athletic endeavors, women’s semi-professional football, she was out to everyone.
“It was easier to be out ‘cause like 90% of the team was gay… like some of them are like my lesbian moms, so it’s pretty cool,” said Benett.
During her time with Madison Blaze, Bennett played against transgender and cisgender athletes. “…they both hit the same. Still got a concussion from both of them, like, doesn’t matter if they’re on T or estrogen. Like if you get hurt, you get hurt.”
In regards to the Protecting Women in Sports Act, Bennett thinks it’s wrong and a double standard.
“I find it ridiculous too because already we have it in place: if there is not a sport for women to play like an equivalent sport, they can play on the guy’s team. So in high school, if you are a female you can play on the guy’s football team or if they didn’t have softball, you could try out for baseball, vice versa. So I don’t understand why it’s such an issue. Like if you’re gonna put a born at birth female out there on the field with born at birth males, it shouldn’t matter,” Bennett said.

Being yourself takes bravery
Queer people are not a monolith, so each story is shaped by different life experiences. Alanis Harris plays volleyball at Ripon, a private liberal arts college in Wisconsin. They’re a junior defensive specialist.
Harris uses the labels nonbinary and pansexual or demisexual. While they’re out as pansexual to their team, only a few of them know that Harris is nonbinary.
The main thing holding Harris back from being fully out is the challenges that come along with it.
“To make myself even more different from them in yet another way… I don’t know whether it’s more exhausting to put on my girl persona every time I go to practice or dealing with that,” said Harris.
Even though they haven’t experienced homophobic behavior from teammates or opponents, that doesn’t stop struggles that Harris faces.
“For someone who is not straight or not cis[gender] like it’s really scary because it’s just like, I don’t know…I just sometimes I wonder if I really belong on this team,” Harris said.
While Harris struggles with the feeling of belonging, they have words of encouragement for younger athletes who might be scared to pursue sports because of who they are.
“The only way it’s ever gonna change is if we have more young people willing to be themselves and willing to put themselves out there and make themselves visible. So it’s just going to be a long, lot of steps. A lot of kids having to be brave over and over again, basically, until something changes,” said Harris.

Sharing your identity
Olivia Marron is a dual sport athlete at Madison College, playing both basketball and volleyball. This is her second year as captain of the volleyball team and will be filling that role for basketball in the spring.
Marron, like others, struggles with what labels to use.
“Queer, gay, bisexual, I don’t know. It’s hard. I haven’t, like, officially labeled myself…so yeah, any of those,” said Marron.
Marron came out to her basketball coach over Facetime. The rest of her team found out over time. While Marron was talking about her partner to a teammate, others joined in on the conversation.
“I’m not shy about it anymore,” Marron said.
While Marron doesn’t shy away from talking about her identity, the same doesn’t apply for queer youth participating in sports.
Four out of five queer youth are not out to their coaches about their sexual orientation and 82% are not out to their coaches about their gender identity, based on a study done by the Humans Right Campaign in 2017.
When it comes to her journey and advice she’d give to others, Marron feels that one of the hardest battles to overcome is the battle with yourself.
“I think that the biggest thing is the battle within. But if you validate your own feelings and talk to people who love you and people who you feel safe with, then you will be able to get through it. And keep pushing, you know, push for your own identities and keep working hard and doing what you gotta do and you’ll feel comfortable one day,” said Marron.

Existing regulations
Across all colleges, there are different rules that each has to abide by. For example, private colleges can make and enforce different rules that public colleges can’t. This can be things like dress codes and curfews.
Madison College is a public, two year college. While some of the sports are Division 3 and some of them are Division 2, they all fall under the realm of the National Junior College Athletic Association, or the NJCAA.
Although Madison College must abide by NJCAA rules no mater what, Athletic Director Steve Hauser said, “My interest and our interest is that we offer involvement opportunities for as many people to be involved as possible that want to be involved.”
When it comes to transgender athletes, most of the NJCAA rules are about how much surgery or hormone treatment is required to participate in sports.
Transgender athletes who aren’t getting surgery or taking any hormone treatment are allowed to participate in sports that correspond with their identity that was assigned at birth. Female to male athletes are allowed to participate in men’s teams, the same way that cisgender females are. Male to female athletes are not allowed to participate on women’s teams, same as cisgender males, unless the status of the team is switched from “sex segregated” to “mixed” status.
Even though these rules would be subject to change if the Protect Women in Sports Act were to pass at a large scale, Hauser said that Madison College creates an accessible atmosphere.
“I do feel that we could effectively accommodate any interest of any gender or gender identity with our student body,” said Hauser.

Feelings uncertain for athletes
A study conducted across NCAA Division 3 schools in 2018 found that most people think that the schools are welcoming and free from discrimination for LGBTQ+ athletes, while LGBTQ+ athletes did not agree or felt “neutral” about it. The uncertainty of it indicates that the environment might not be the most welcoming.
Since the introduction of the Protect Women in Sports Act, another similar bill has been proposed in Wisconsin. It would force the University of Wisconsin and technical colleges to only allow cisgender athletes to participate. The bill was introduced on April 22, 2021, almost one month after Transgender Visibility Day.
Every student athlete is going to have a different experience. But queer athletes already face uncertainty and regulations from collegiate organizations, and they feel matters will only be made worse if the government passes bills.