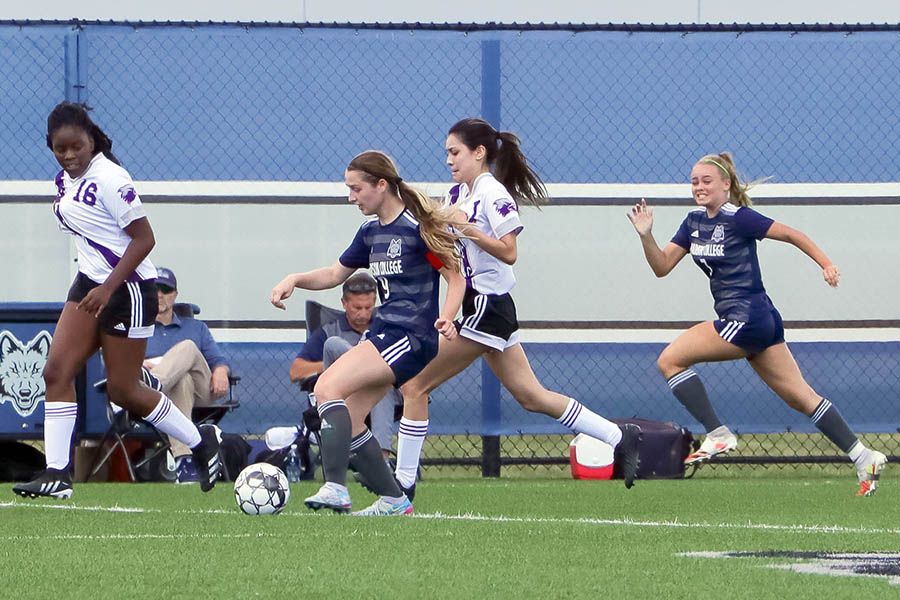 WolfPack women's soccer player Elizabeth Foye fights to get past defenders during a recent match.

Angelina Perez and her teammates on the Madison College women’s soccer team had the kind of match against Illinois Valley Community College that others only dream of having.

Perez scored three goals in the first 10 minutes of the game and added two more later as her team cruised to a 12-0 victory at home on Sept. 9.

The WolfPack now stand at 2-1-1 after playing to a 2-2 tie against Elgin Community College on Sept 11.  Perez and Smyth both scored in the first half against Elgin, but the host team rallied back with two second half goals.

Gray shot a 73 both days of the 36 hole invitational to post an overall score of 146, two strokes behind the individual medalist. Madison College finished with a total score of 630, 12 strokes behind invite champion Black Hawk College.

Earlier in the week, Madison College finished sixth of 12 teams in the Clarke University Fall Invitational on Sept. 7.

Next up for the WolfPack golfers is the Blugold Invitational hosted by the University of Wisconsin-Eau Claire on Sept. 19-20.

After a 1-5 start to the season, the Madison College volleyball team picked up its second win with a sweep of Lakeland University JV, posting a 26-24, 25-19, 25-21 victory. Outside hitter Jayden Holman had 10 kills, reaching double-digits for the third time in four matches.

Madison College earned another win in the opening round of the Joliet Junior College Mizuno Invitational, outlasting Lake Michigan College in five sets.

Madison College’s next home match will be against Milwaukee Area Technical College on Tuesday, Sept. 21, at 6 p.m.