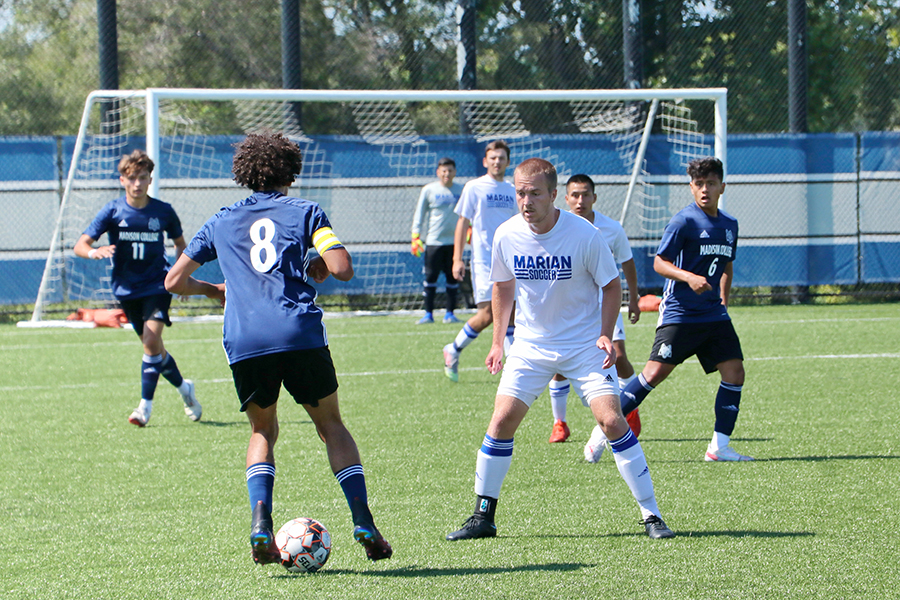 Madison College's Jonas Luskey Sanders, 8, looks to get past a defender during a recent scrimmage.

The Madison College men’s soccer team has a new coach this season. Tim Bruner has taken the reigns after serving as an assistant coach at Edgewood College the past four years.

Bruner is an Edgewood College alum, where he competed on both the soccer and tennis teams. He still holds the school’s assist record with a total of 26. In addition, Bruner has coached for the Madison 56ers club team for the past five years.

The new coach kindly answered some questions about what to expect from the upcoming soccer season.

Q: What are your expectations for the season?

A: Given this is my first season, I’m not sure what to expect from the perspective of results. I know we will be hard working, respectful and organized.

Q: Who are your top returning players and what do you expect from them this year?

A: We are still pretty early in the pre-season so our coaching staff is learning more and more about the players every day. … Jonas, Jheison, Matthew, Sebastin  and Sully have all been standouts for the college in the past according to the statistics and match footage we have seen. In watching them live, we can see why.

Q: How many incoming players do you have? What excites you about them?

A: The launchpad to the season was a short one being hired about four weeks before the first day, so recruiting was largely carried by Coach Matt (Schwartz) and Coach Tony (Parades). The program is thankful they put us in a position to succeed.

Erick Antimo is going to be a big contributor on the attacking side. He has a nose for the goal and can supply as well as finish.  Isaak Cordova is also an attacking player. He brings some size, speed and power to our front line.

Jose Gonzalez has been performing at a high level in training. He has excellent vision and will be a big part of our buildup.  Adriano Ponte is a polished player that we can plug into multiple positions.

Q: How do you think the conference teams will stack up this year?

A: That is a fantastic question. The coaching staff haven’t seen the opponents in live matches before and am new to the level, so any observation we would make would be purely speculative. We feel good about the work rate we see in training and the pieces we have. In terms of where that lands us, not really sure.

Q: What do you think your team’s strengths will be this season?

A: We are going to be dynamic and create loads of scoring chances. Through the midfield we have players that take good care of the ball. The backline is coming together and should have good pace and athleticism. We think a lot of our goalkeepers. We have four great ones. They have all had fantastic attitudes about the competition for the position and it is helping make the best version of themselves.

Q: How excited are the players to have a full season this year?

A: There are a lot of smiling faces on the training grounds. COVID gave us a lot of time to reflect, and the players realized how important soccer was to them. It had never been taken away before and having that happen generated an appreciation for its value.

Q: How excited are you to be coaching a college team?

A: My high school guidance counselor, Sister Karen asked me what I wanted to do for a career. It was a long and windy path but I am now doing it. Needless to say, very excited. Derek Helmer and Edgewood College helped me achieve that on an assistant level and prepare me for this.

Q: How different has it been from coaching a club team?

Q: What brought you to Madison College?

A: Madison College has a strong tradition with both our men’s and women’s soccer programs and has a history of fantastic leadership through the years. I’m excited to have my name added to the list of coaches.

The men’s next home match will be against Triton College on Wednesday, Sept. 8, at 3 p.m.