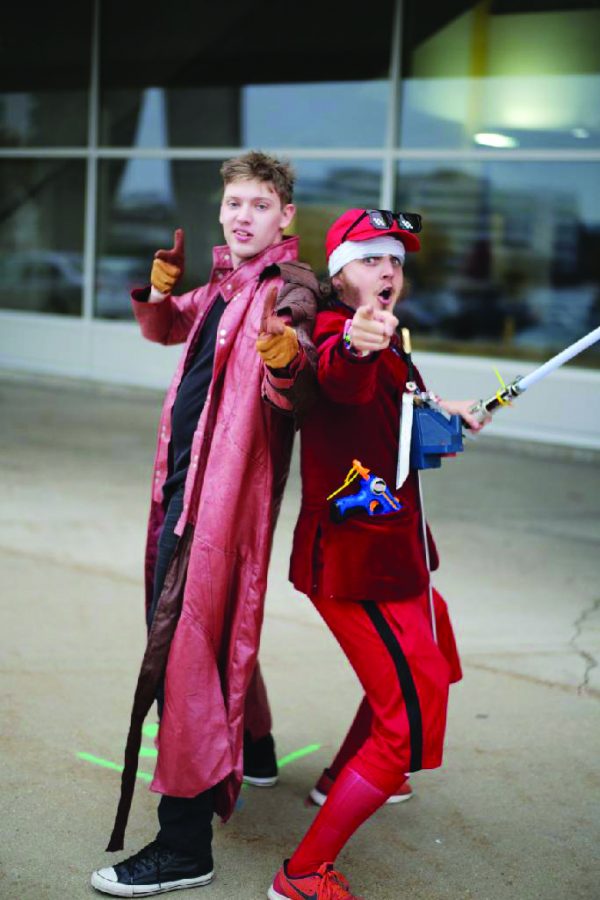 Above, Alan Zarzycki (left) along with a friend as they cosplay characters. Below, a film club meeting held over video chat.

Madison College’s new and improved film club has brought the community together through the art of picture.

With the help of Alan Zarzycki, a Liberal Arts Transfer student as well as the co-founder and president of the Madison College Film Club, film withholds its meaning even amongst a pandemic.

“I formed the film club out of the ground,” said Zarzycki. “There was a former film club that didn’t exist for five years at MATC, and I wanted to bring it back to life.”

After joining Madison College two and a half years ago, Zarzycki thought “If I want to survive MATC, I need to have somebody or a group that knows who I am.”

So, Zarzycki began recruiting people for a film club.

The club consists of film making and watching and analyzing old and new films. It also holds many discussions regarding the tactics and meanings behind the art. The club is a resource for future filmmakers, and anyone just interested in the subject.

“My goal, as a film club, is to really help people get out of the shadow and feel more connected. And as a filming community, when we talk about films, when we make films, it helps our community grow stronger because we are expressing our emotions and feelings and our behavior and our life into a film.”

Zarzycki explained how the club is vital to the college in many ways. It encourages safe and social interaction amongst people who are interested in film. It creates an environment where people can brainstorm ideas and think critically. And even during a pandemic, the club is continuing to create ways to keep filmmaking safe and possible.

“When the pandemic hit, it changed everything for the club. When I learned that our school was shutting down, I had to take a different approach,” said Zarzycki.

Since COVID-19, the club has not met in person. Instead, they communicate via WebEx every Friday at 7 p.m. If an individual is interested in joining, they can visit Wolfpack Connect or contact Zarzycki, himself via email: [email protected]

Zarzycki will be transferring to UW Madison this fall, so he is looking for people who can “fill his shoes” and “keep the club going.”

“By the time I leave film club, I want people to remember my legacy, where the film club started and really recruit people because I want this club to survive without me.” said Zarzycki.

The 22-year-old film buff explained how the “spark” that ignited his passion of film came from his original creation, The Candleman. The thriller, suspense and horror film won the best narrative award at the James Madison Memorial Film Festival in 2018.

This was a reminder to Zarzycki to remain set on his dreams of being a filmmaker, no matter the struggles. His perseverance has led him this far.

“Be confident, like don’t give up, because that was me back then. I was about to give up making a film club. But don’t tell yourself no, and don’t let other people tell you no. Keep fighting.”