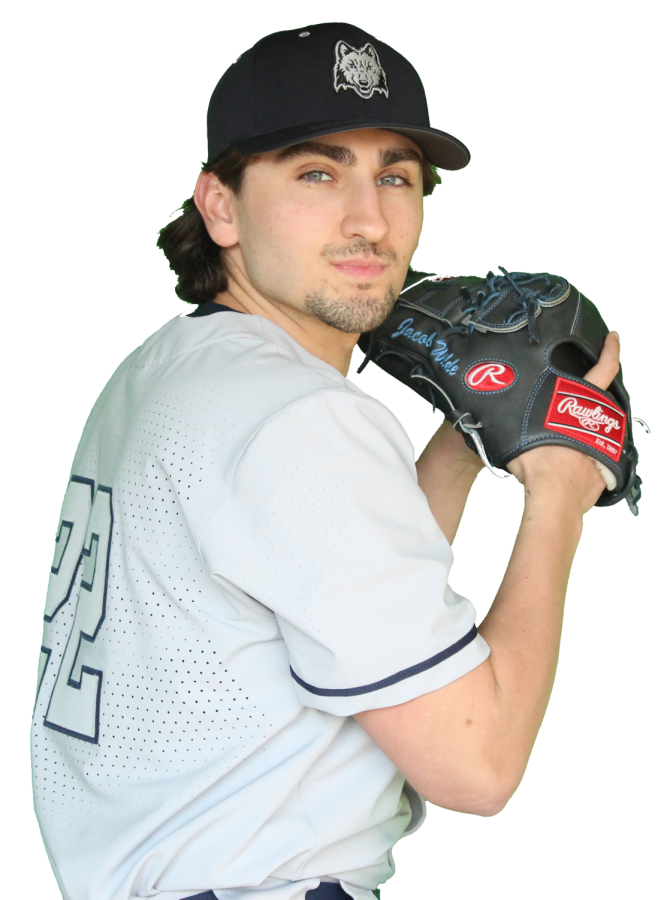 Freshman pitcher Jacob Wilde already has two wins this season and has pitched in four games for the WolfPack.

After an up-and-down series of preseason games, the Madison College baseball team opened conference play in a big way, winning both games of a doubleheader at home against Milwaukee Area Technical College on April 3.

Madison College won the first game, 4-3, before taking the second game, 16-6.
The first game saw Madison College rally with two runs in the bottom of the sixth inning after Milwaukee had taken a 3-2 lead in the top half of the inning thanks to two walks, a hit and an error.
The rally started with a single by Gabe O’Brien, who moved to second on a bunt. A single by Spencer Bartel and an error put runners on second and third. Ryan Hubley then drove in both runs with a single to right field.
O’Brien had two hits in the game to lead Madison College, while he and Eli Kramer both hit doubles.
In the second game, Madison College had to rally from a 6-0 deficit after the first inning. But an eight run third inning and five run fifth inning provided the WolfPack with more than enough offense for a 16-6 win.
Jake Nelson led the team with three hits and five RBIs, including a three-run home run. Gunnar Doyle also had three hits and Gabe O’Brien added two.
Alex Redman pitched the win, his second of the season, allowing no runs on four hits in 4-1/3 innings.
The WolfPack, now 2-0 in conference play and 9-6 overall, plays four games against Bryant and Stratton College this week before returning to conference play with two home games against the College of DuPage on April 10.

Triton College 6, Madison College 5
Madison College’s 5-0 lead disappeared when Triton College scored six runs in the bottom of the fifth inning on its way to a 6-5 victory over the WolfPack in the first game of an April 2 doubleheader. The big inning for Triton featured a three-run home run and a go-ahead triple.
Madison College was led by Eduardo Saucedo and Jake Nelson, who both had two hits in the game. Riley LeTourneau pitched the loss, allowing six runs on six hits in 4-2/3 innings.

Triton College 7, Madison College 0
Hits were hard to come by for visiting Madison College in its 7-0 loss to Triton in the second game of the doubleheader. The WolfPack was held to just three hits in the game, with no extra-base hits. Adrian Montilva pitched the loss, allowing five runs on seven hits in 4-2/3 innings.

Madison College 21, Rockford University JV 5
The second game of the doubleheader saw Madison College step it up a notch, with 21 runs on 12 hits to win 21-5. The WolfPack scored six times in the sixth inning and seven times in the seventh inning.
Nelson, Eduardo Saucedo, Kameron Laskowski and Taiten Manriquez each had two hits in the game. The WolfPack also had a triple by Saucedo and five doubles in the game. Four pitchers took the mound in the game for the WolfPack, with Luke Hansel earning the win and Jett Thielke getting the save.

Madison College 10, Kankakee Community College 5
A 10-hit, 10-run effort allowed Madison College to beat Kankakee, 10-5, and earn a split in the March 27 doubleheader.
Storbakken led the way for Madison College with two hits, including a home run, and five RBIs. Kameron Laskowski, Jake Fulton and Nelson each hit doubles for the WolfPack.
Pitcher Jacob Wilde earned the win in relief to improve his record to 2-0, allowing three runs on three hits in three innings.

Oakton Community College 5, Madison College 3
Visiting Madison College saw its 3-1 lead disappear when Oakton scored twice in the fourth and fifth innings to upend the WolfPack, 5-3, on March 26.
Madison College was held to just four hits in the game and struck out 14 times. Pitcher Riley LeTourneau was credited with the loss, pitching 4-1/3 innings in relief and allowing two runs on two hits and two walks.