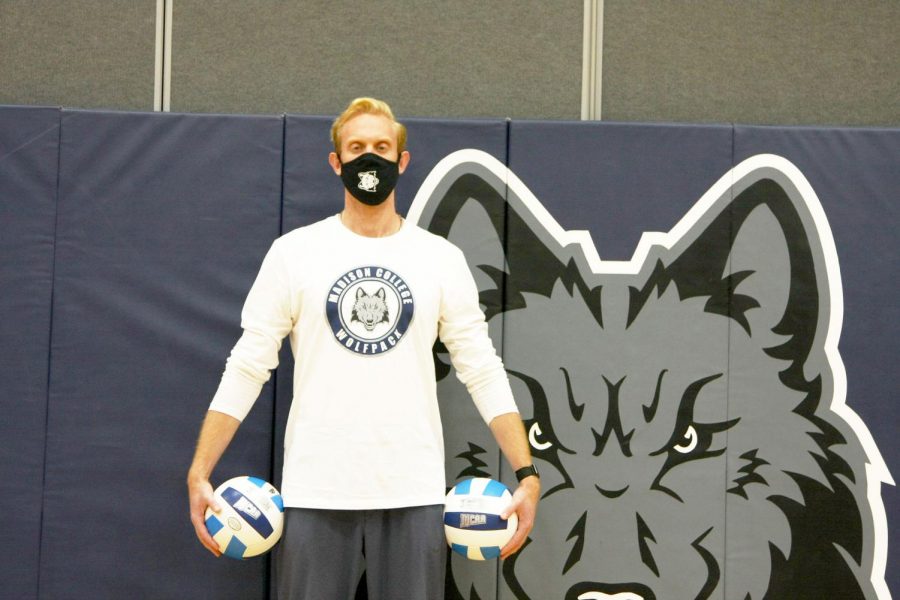 Quinn Lukens is new coach of the WolfPack volleyball team.

When it comes to coaches, the women’s volleyball program has seen many of them in the past few years.

After Ashely Davis’ leave in 2018, Jeffery Thomas was hired on. He left after one season on short notice, leaving the assistant coaches, Lindsey Swansby, Emily DeJarlais, and Sydney Toon to fill the role as co-head coaches.

This season, Quinn Lukens will lead the WolfPack, assisted by Rachel Burke and Tyler Larke.

Although he’s new to being a collegiate head coach, he’s a familiar face in the Madison volleyball scene. Since moving from California 10 years ago, he’s been involved with the club volleyball team, Capital.

He was hired just days before COVID-19 closed the campus last spring. Having only three days in his office before everything shut down could be seen as a bad thing, but he looks at it in a positive way.

“I think it’s beneficial for a first year coach like myself to have such a, you know, to be a part of things when it’s so new for everybody,” he said. “So I don’t feel like I’m behind the eight ball in any way because everybody is on the same page basically right now.”

He hopes to bring consistency during his time as head coach.

“Knowing that there’s been a variety of different coaches over the past five or six years, you know, I definitely want to establish a consistent culture, you know, so there can be a little bit of history within the program, or at least the program under my leadership and the coaching staff’s leadership.”

Lukens hopes to make some improvements. He wants the volleyball program to gain the reputation of consistently having athletes play at the next level.

“I want to establish culture, you know, and make sure that the experience that athletes have playing volleyball at Madison College is a positive one, but also a challenging one,” Lukens said.