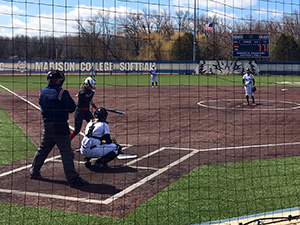 The Madison College softball team will have a busy start to May, with 12 games scheduled in six days.

The first six days of May will be busy for the Madison College softball team. Weather permitting, the WolfPack will play 12 games in those six days thanks to some re-scheduled games and the start of tournament play on May 10.

As of now, Madison College stands at 21-11 overall and 6-3 in conference play, good for second place with just two conference games left.

The team then wraps up regular season play at home with doubleheaders against College of Lake County on May 5 and Illinois Valley Community College on May 6.

Madison College 12, Carl Sandburg College 6
The second game of the doubleheader saw Madison College score three runs in the first inning and five runs in the third inning on its way to a 12-6 win. Sophie Rivera finished with a team high five RBIs and a career high three hits. Madison College had four triples in the game, with Maddie Kvatek, Bri Unger, Kianna Patterson and Rivera each hitting one.

Madison College 8, College of DuPage 3
After falling behind 2-0, Madison College rallied to an 8-3 win in over DuPage in the second game of the doubleheader. Patterson hit a two-run home run in the bottom of the third to tie the game, the first home run of her career. Mallory Sterling hit her second career home run in the fifth inning to key a four-run inning for the WolfPack.