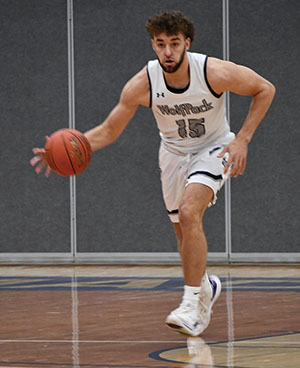 Madison College’s Keith Hoffman (15) drives up court during a game earlier this year. Hoffman led the WolfPack in scoring this year, after returning to the sport after an eight-year break.

The typical NCAA athletic journey is to graduate from high school, enroll in your chosen school, go to orientation, receive loads of athletic swag and add your name to the roster.

For Madison College basketball player Keith Hoffman, his journey to NCAA basketball was more roundabout. After graduating from Stevens Point High School in 2016, the forward took time off to figure out who he was and what interested him. He started his own soft wash and pressure washing business, cleaning customers’ driveways and roofs.

Last fall, he returned to school after an eight-year break from basketball, and was the leading scorer for the WolfPack. Being the top scorer of a junior college Division III team is one thing. Still, according to the NCAA, the estimated probability of competing in college athletics basketball for Division I or II is 1 percent.

Will Hoffman be part of that 1 percent?

After this basketball season, he has a good shot.

During the 2021-2022 season, Hoffman scored 419 points and averaged 15.5 a game. It’s just not field goals or three-pointers. With 9.3 rebounds a game, Hoffman also added 11 double-doubles to his statistics.

After graduating from high school, college enrollment wasn’t on Hoffman’s radar. It wasn’t because he wasn’t interested. He needed time to figure out who he was. He knew he had athletic ability, but football was his original calling.

Hoffman played one year of basketball during his freshman year of high school. He was a good shooter with an exceptionally tall 6-foot-8 frame. However, at only 170 pounds, he was lanky and lacked confidence.

And yet, there was something about basketball that made Hoffman want another chance.

In addition to managing his business, the forward made a daily trip to the YMCA, developing a belief in himself. First, he focused on gaining muscle mass and conditioning. Then, he took a critical eye to his skills and focused on drills and ball handling. On weekends, he gathered a group of friends to play a pick-up game.

Outside the YMCA, Hoffman felt another calling, one that came from his pressure wash operation. Meeting customers, writing quotes and hiring labor gave him enterprising confidence. But with the business profiting, enrolling in college was the furthest thing on Hoffman’s mind.

A couple of years into business ownership, Hoffman knew he wanted to be an entrepreneur, and he realized he could enhance his business judgment by earning a business degree.

“I thought if I’m going to get a degree, I might as well help a basketball program win while I’m at it,” Hoffman said.

The proximity of the University of Wisconsin – Stevens Point was a natural choice for Hoffman, and he enrolled and took virtual classes. However, he couldn’t play basketball with the Pointers as their roster was already filled.

Hoffman’s athletic talents didn’t go unnoticed by the Stevens Point staff. If they couldn’t utilize him, they were certain another team could.

Head Coach Jamal Palmar not only guides the men’s basketball team but also serves as an academic advisor at Madison College. He often uses his master’s in social work and athletic administration to elicit the best qualities in his athletes. After the Stevens Point staff contacted him, Palmer decided to give Hoffman a look.

At first, Palmer didn’t know what he was getting from Hoffman. When they met in person, the head coach had seen that his future player had a strong frame, having gained muscle weight from his years working out. (The earlier videos of Hoffman tell a different story. Palmer had seen footage of his incoming player from his lone year of basketball where he couldn’t help noticing Hoffman was “paper-thin.”)

It didn’t take Palmer long to realize that his incoming prospect was unusually gifted, especially given his many years’ absence.

He sees his player as instrumental in inspiring recruits to join the WolfPack and credits Hoffman in helping the team adapt to their future Division II status, a change that begins next season.

“He does his work in the classroom. He does work on the basketball court. He bought into what we were trying to do. He’s just like a model, so I’m excited to have him be part of our program,” said Palmer.

Hoffman is grateful for the leadership advice from Palmer.

“Not having a coach since ninth grade (Palmer) welcomed me with open arms. Having someone like that in my life who respected me and gave me an opportunity meant a lot,” Hoffman said.

Hoffman appreciates that Palmer trusted him to take the big shots down the stretch. “It made me play harder for him, especially when you have a coach that cares about you so much,” he said.

Division I and Division II coaches haven’t overlooked the hard work. Palmer has been fielding calls about his player all season, with several offering him full-ride scholarships.

Hoffman is excited but humbled.

“(It’s) awesome to hear coaches were reaching out and showing that interest and support and wanting me to be a part of the next program (and) the next level,” Hoffman said.

Someone who has seen Hoffman on and off the court is teammate and friend Teagan Kirsenlohr. The two met at the YMCA, where both were weight training. In addition to his friend being the team’s highest scorer, he’s seen an eagerness to learn and be a leader in Hoffman.

“(Whether) he’s in practice, on the road, or whatever it may be, he’s friendly with all the guys. He listens to the coaches. He wants to learn more,” Kirsenlohr said. “I noticed when we needed it to in our locker rooms. He would try to talk to everybody to get everybody on the same page when we needed it [and] be a leader.”

Hoffman knows that taking time off from high school is not the path for everyone, but it was the best path. He believes those years benefited him beyond becoming a better athlete, and he also believes he became a better adult.

As far as advising aspiring college athletes, Hoffman emphasizes patience and finding your own rhythm.

“Go at your own pace. You don’t have to get to where you want to be in a day. It takes years of hard work, and it just took me a little longer to blossom than everyone else because I didn’t play in high school, and I’m now looking to move to the next level, Division I or Division II, on a scholarship. I look back and know I made the right choice.”