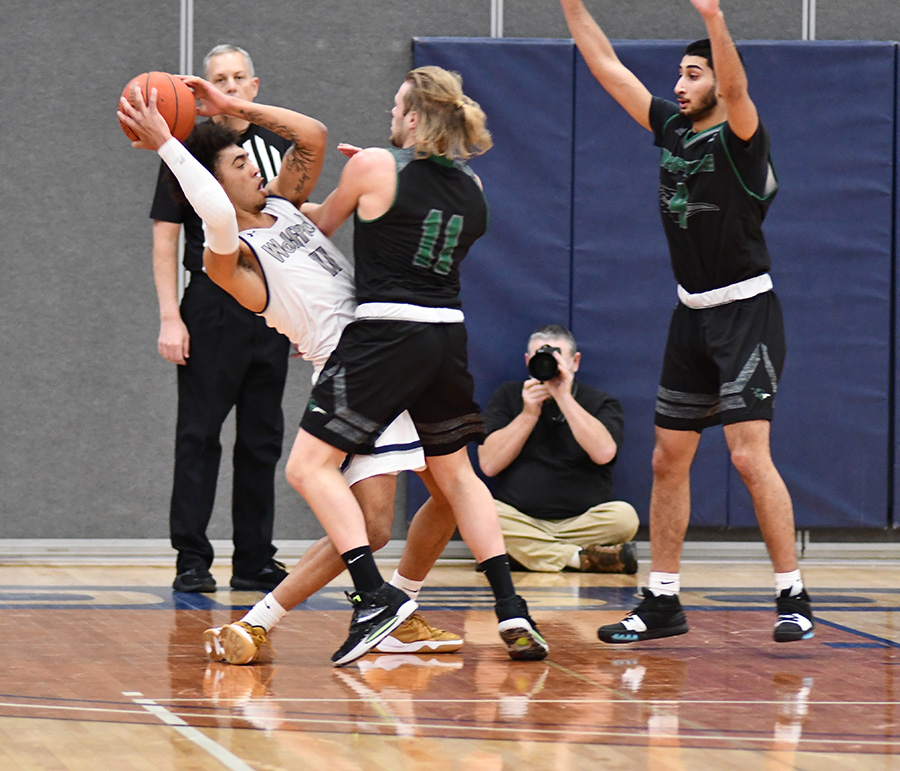 A season-best showing from behind the three-point line for the Madison College men’s basketball team was enough to send its tournament game against Rock Valley College to overtime.
But it wasn’t enough to give the WolfPack a win.
Rock Valley College claimed a 93-86 victory over Madison College in the NJCAA Region 4 Division III men’s basketball tournament on Feb. 18 with an 8-0 run in the final two minutes of overtime.
Madison College made a season-high 14 three-pointers and shot 52 percent from behind the arc. The WolfPack hit 12 of those three-pointers in the second half, including a dramatic game-tying shot at the end of regulation by Keith Hoffman.
Hoffman led the team with 22 points, which included five three-pointers. He scored 18 of his 22 points in the second half to help the WolfPack rally from a 36-27 halftime deficit.
Trevon Liggins posted his first career double-double with 18 points and 12 rebounds, both career highs. Nik Feller hit a career-high four three-pointers and finished the game with 15 points. Telin Porter had a big game as well, with 12 points and nine rebounds.
Hoffman, a freshman forward, led the WolfPack in both scoring and rebounding this season, averaging 15.5 points and nine rebounds a game. He also hit a team-high 53 three-point shots during the season.
Porter, a freshman guard, was second in scoring with 9.3 points a game. He led the team in assists with 54 and steals with 46.
With the loss, Madison College ended the season with a 16-11 record.
The 16 wins are the most in a single season under Coach Jamal Palmer and extended the team’s streak of double-digit wins to seven seasons.
Rock Valley College went on to upset top-seeded Joliet Junior College, 78-61, and win the Region 4 Division III Championship.