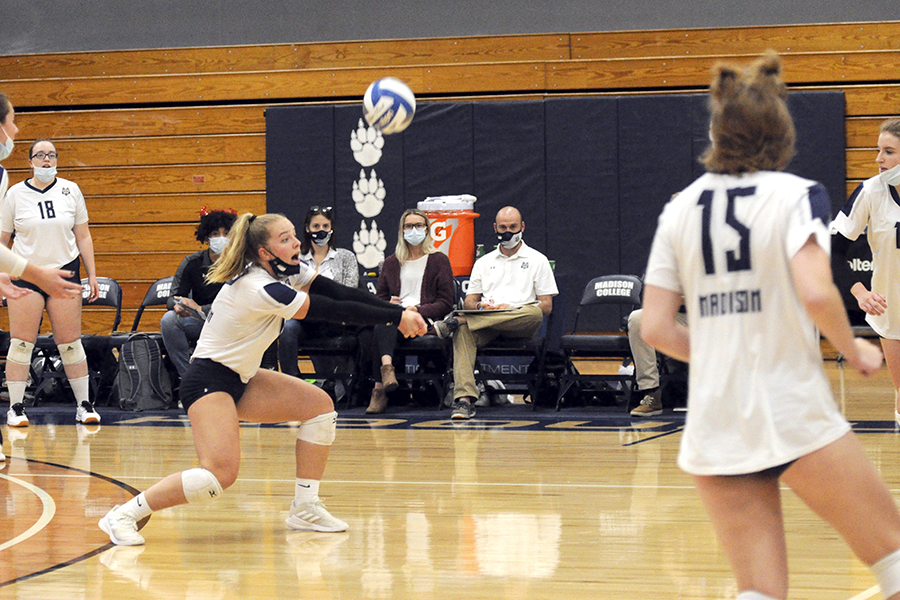 They faced a familiar foe on familiar turf, but neither turned out to be an advantage for the Madison College volleyball team in the Region 4 Division III Tournament Semifinal played at Redsten Gymnaisum on Oct. 28.
Madison College was swept by conference opponent College of DuPage, 25-20, 25-21, and 25-22. The WolfPack ended the season with a 15-13 record, falling in the region semifinal for the third time in four years.
Despite the sweep, the match was close throughout, as was expected. The two teams split during the regular season, with each winning at home.
The first two sets were determined by strong surges by DuPage that Madison College couldn’t answer. In the first set, Madison College battled to a 9-8 lead before DuPage took control with an 11-6 run. In the second set, the match was tied, 14-14, before DuPage took the set with an 11-7 surge.
Madison College took a five-point lead early in the third set, only to see DuPage rally back late to close out the match.
Jadyn Holman led Madison College with 15 kills, adding 10 digs to post her 12th double-double of the season. Mariah Best had 24 assists, while Amelia Walton added 20 digs. Kaleia Lawrence led the team with three aces and added five assists.
DuPage advanced to the Region Championship, where it lost to Rock Valley College, 3-2. Rock Valley now heads to the NJCAA Division III National Tournament for the second time in three years. The tournament opens Nov. 11.