Holman ties school record for kills in a match 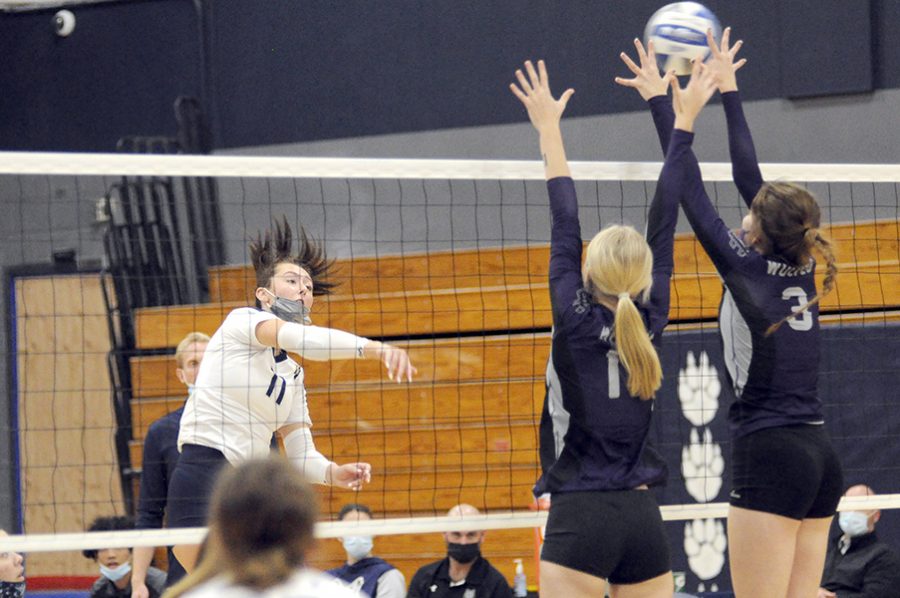 Madison College’s Jadyn Holman hits a ball off two Joliet Junior College blockers for one of her team-record 25 kills during a 3-1 victory at home on Oct. 21. Holman was one of six players recognized during sophomore night.

Outside hitter Jadyn Holman had a career-best performance to close out the regular season for the Madison College volleyball team.

Holman tied a school record for kills in a match as she led her team to a 3-1 win over visiting Joliet Junior College at home on Oct. 21. Not a bad way for one of the team’s six sophomores to celebrate sophomore night.

It was Holman’s third match of the season with 20 or more kills. Five matches prior, she posted 24 kills against Rock Valley College to tie for third most in school history. She now shares the school record for kills in a match with two others.

After winning four of its last five matches, Madison College finished the regular season with a 15-12 overall record and a 6-4 conference record.

Next up for the WolfPack is the NJCAA Region 4 Division III women’s volleyball tournament semifinals on Oct. 28. Winners will advance to play on Oct. 30 for a berth in the national tournament.

A dominant performance made for a quick night of work on Oct. 14 as Madison College beat Lakeland University JV in straight sets, 25-19, 25-8, 25-22. Holman had nine kills, Borchert four blocks and Best 15 assists.