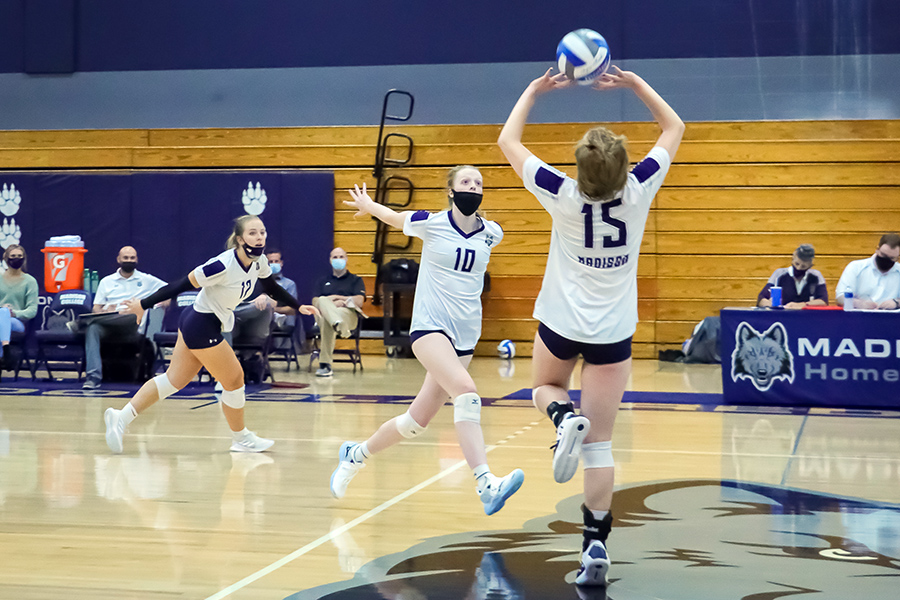 A rally from a two-sets-to-none deficit brough Madison College within a few points of a upset of top-ranked Rock Valley College at home on Oct. 5.

The team’s defense played a big part in the rally as the team posted 127 digs, led by sophomore libero Amelia Walton’s career high 42 digs. The total is tied for third place in program history.

Setters Kaleia Lawrence and Mariah Best had strong performances as well. Lawrence had 23 assists and 14 digs. Best had 20 assists, 14 digs and seven aces.

Madison College now stands at 11-11 overall and 4-3 in the conference standings. The WolfPack travels to play Milwaukee Area Technical College on Oct. 12 before hosting Lakeland University JV on Oct. 14 and Bryant and Stratton College on Oct. 15.

The Madison College men’s soccer team rebounded from a rare loss with a 2-1 victory over conference opponent Rock Valley College on Oct. 9.

Madison College was shut out by Illinois Valley Community College, 1-0, on Oct. 2. A late second half goal by Illinois Valley was the difference in the match. The WolfPack actually had more shots than its opponent, 14 to 11, but was unable to convert.

Freshman midfielder Karmen Smyth scored three goals to lead the WolfPack to a 5-0 victory at Rock Valley on Oct. 9. Angelina Perez and Alexis Kulow both also had goals in the match. Perez has now scored 15 goals this season, while Smyth has nine and Kulow has six.

On Oct. 2, it was Perez who had the three-goal match. She scored three times in her team’s 5-0 victory over Illinois Valley Community College. Smyth, Cassidy Olson and Monica Tapia-Gutierrez also scored in the win.

A fifth-place finish in the Viterbo V-Hawk Invitational on Oct. 4 and Oct. 5 marked the end of the Madison College golf team’s fall season. Freshman Ben Busick was the top finisher for the WolfPack, placing 22nd overall with a two-day total of 170. Madison College had two players tie for 23rd overall, with freshmen Kaleb Lycke and Jake Rebholz posting 172 totals.