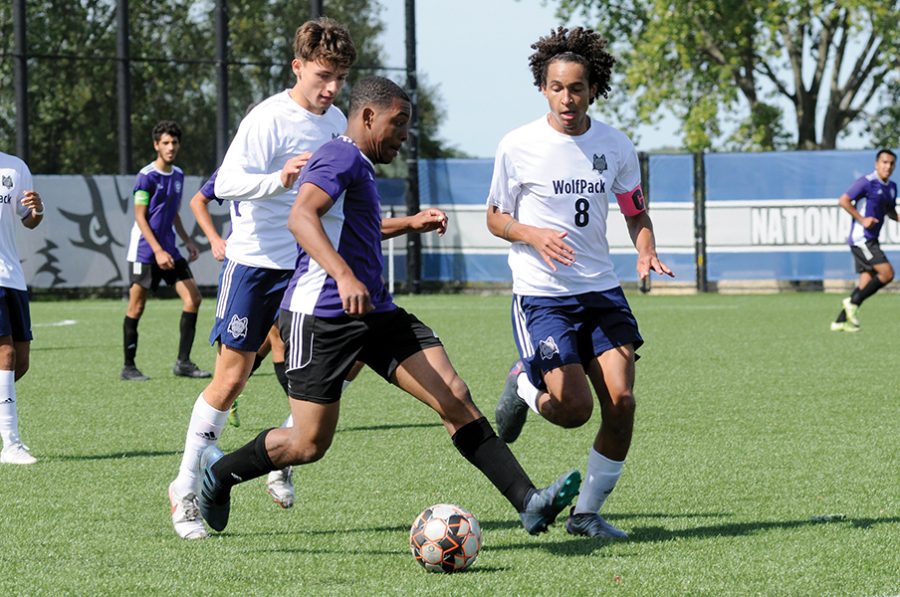 How do you get past your first loss in weeks? By dominating an opponent, 6-0. At least, that’s the way the Madison College men’s soccer team responded in its match against Joliet Junior College on Sept. 25.
Sophomore Jonas Luskey Sanders led the way in the big win with three of goals. He leads the team in both goals and assists this season, scoring nine goals and five assists through eight matches.
Madison College now stands and 6-2 overall and 4-1 in conference play. Its only conference loss was 3-2 in overtime at Harper College on Sept. 22. The loss snapped a five-match winning streak.
Harper College is the defending conference champ and now has won nine straight matches against Madison College.
Although Madison College currently leads the conference standings with a 5-1 record, both Harper College and Rock Valley College have only one loss. The WolfPack will play both teams again before the season ends on Oct. 16.

Women’s soccer
When the Madison College women’s soccer team scores, there’s a 50/50 chance that Angelina Perez had a part of it. The team has scored 26 goals this season, and Perez has scored 10 of them and had assists on three of them.
Madison College beat Rock Valley College, 4-1 , on Sept. 15 and beat Harper College, 5-1, on Sept. 22. Perez scored the go-ahead goal against Rock Valley and netted two goals against Harper College.
Other scoring leaders for the WolfPack this season include Karmen Smyth (five goals and two assists), Alexis Kulow (three goals and one assist), and Taylor Peterson (three goals and one assist).
The WolfPack now stands at 4-1-1. The squad’s next home match will be on Oct. 13 against Bryant and Stratton College.

Volleyball
The Madison College volleyball team posted its biggest victory of the season on Sept. 24, with a five-set upset of No. 3 ranked Harper College. It was the first time the WolfPack have beaten the Hawks in the last five matches, and only the third time they’ve won in the last 15.
Callie Borchert led a strong defense, with 11 blocks. She became the third Madison College player to post 10 or more blocks in a single match. Borchert also had 11 kills in the match. Setters Mariah Best and Kaleia Lawrence both had 21 assists.
Madison College also defeated conference opponent Milwaukee Area Technical College, 3-0, on Sept. 21 and Bryant and Stratton College, 3-2, on Sept. 16.
The WolfPack now stands at 7-10 overall and 2-2 in conference play. After traveling to Joliet Junior College on Sept. 28, Madison College will host College of DuPage on Sept. 30.

Golf
Competing against a pool of four-year schools, Madison College golfers finished tied for eighth in the Frank Wrigglesworth Bluegold Invitational hosted by UW-Eau Claire on Sept. 19-20.
AJ Gray led the WolfPack with a score of 163, good for 18th place individually in the tournament, finishing 10 strokes behind the individual winner.
In addition, the WolfPack won a head-to-head match play competition against Southwest Tech in the inaugural Match Play at the Chalet event held on Sept. 23.
The fall golf season wraps up with the Region 4 Classic on Oct. 1 and the DuPage match play event on Oct. 3.