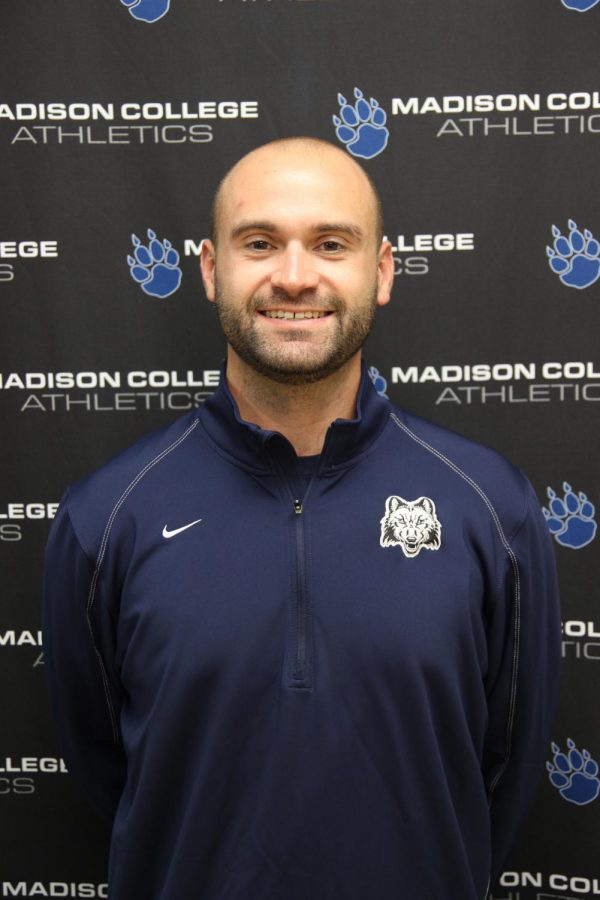 Photo Provided to The Clarion

Voices of young warriors accompanied by staccato squeaks of gym shoes on a glossy wooden floor fill the cavernous hall. Frequent drum beat sounds of hands punching a volleyball punctuate cheers of encouragement from the WolfPack.

The WolfPack crowd rises nearly as one raucously cheering as the WolfPack players spike one more ball past their opponent’s defense. One player cheers, “WolfPack on three, one two three,” and the rest reply in unison, “Wolfpack, ahwooo!”

One man in the crowd was especially proud.

Tyler Larke cheered on the WolfPack women as they won back-to-back women’s collegiate NJCAA volleyball championships in 2013 and 2014. Larke remembers watching those championship teams, “They were confident, they were really good, cohesive.”

The 32-year-old Larke now begins his sixth-year coaching as an assistant or volunteering with the WolfPack. Larke thinks this year, the WolfPack volleyball team has what it takes to win the championship again.

In 2015, Larke became an assistant volleyball coach at Madison College, and the team returned to the tournament and placed third. Larke brings 12 years of coaching experience to the team, and he enjoys coaching so much he even volunteered to help one year. Eventually, Larke wants a coaching job at the Division I collegiate level.

Larke, originally from Georgia, coached three of these young athletes through another youth volleyball program and proudly sent them on to Madison College. During a phone interview, Larke recalls that he frequently watched from the stands as the WolfPack “came out on the court every game … like they were going to win every single match.”

Larke attended Madison West High School and played four years of high school boys’ volleyball. He lettered each year before he graduated in 2006. After high school, Larke concentrated on pursuits other than volleyball for two years while attending the University of Wisconsin, Milwaukee. In 2009 he returned to Madison and donned the mantle of a coach.

Madison West junior varsity boys’ volleyball team was Larke’s first experience as head coach. He says he coached the boys for six years and then discovered that “club teams,” like women’s volleyball, were “a little bit more competitive.” He joined Wisconsin’s Performance Volleyball Clubs, where he has coached for the last eight years.

Today, Larke fondly remembers his first year as a WolfPack assistant coach and their road to the championship.

“There are highs and lows when it comes to national tournament time, and that the 2015 year all the other teams were (at an) extremely elevated level,” he said. He remembered the tournament in Rochester, Minnesota, as “competitive and really fun.”

One WolfPack player, Kaleia Lawrence, 20, said during a WebEx interview that she thinks Larke is a “very good coach, he really knows the game well and does an excellent job communicating with all the players.”

She likes Larke as a coach because he recognizes her potential as a player and encourages her to excel. Lawrence says Larke provides a “positive experience…he pushes us.”

Although the Covid-19 pandemic has postponed the season, Larke looks forward to returning to play possibly as early as this spring.

“We’ve had a good five to six months with the team to practice. In the long run, it will be better for us,” he said. Usually, the team has a “small time frame to practice before the first game,” Larke said, but this year fall sports were postponed to the spring semester.

Lawrence reports in a recent Clarion article that the restrictions changed the practice regimen. According to Lawrence’s Aug. 31 article, the athletes have their temperatures checked before each practice, and they must fill out a survey that informs the team if they feel healthy.

Larke encouragingly points to Quinn Lukens, the WolfPack Volleyball Coach and Performance Coach, as a reason for his optimism. Larke says Lukens has “done a really good job at keeping team cohesiveness.” Larke also says Lukens brings enthusiasm to the team and that he “holds the girls to a higher expectation, and he always talks about their voice, in general, the girls have to bring their voice.”

Larke says the ladies can win this together if they all bring their encouraging voices. He says he feels “potential here, and I think it helps that I’m here because I know almost all the girls from last year.” He says the whole team benefits from that familiarity. When referring to the team’s understanding of each other, Larke says, “It makes them comfortable,” and that ease contributes to “team cohesiveness and energy.”

Of course, Larke knows the quarantine has affected almost every aspect of people’s lives. This year some players are less than “in the best shape they have been.” Larke also feels “this year is kind of strange. Clearly, you know pandemic and stay at home orders and distancing and masks and whatever, how does that affect you as a coach.”

Isolation has affected other factors of this year’s team dynamics. With mask orders and social distancing Larke says there are more water breaks because of mask-wearing during gameplay. Worse, Larke laments, “there are no more team huddles, no more high-fiving…they tap shoes or give an elbow.”

Practices and team spirit are not the only aspects of the game that look and feel different. A look at the Madison College website shows no scheduled games, which clearly indicates the season in a state of flux. Larke says he knows Lukens, the other head coaches, and athletic directors have shared much communication and is confident “they have some…plan in place” for the season.

Through coaching, and because of Covid-19 restrictions, Larke’s experience leads him to believe this year is about “learning to adapt,” He says the team will “make it work.” When asked directly about the Wolfpack, Larke said, “We all really work well together,” and he extols the team’s commitment to making it work this year and says we should be happy for that, “at least we’re getting to play.”