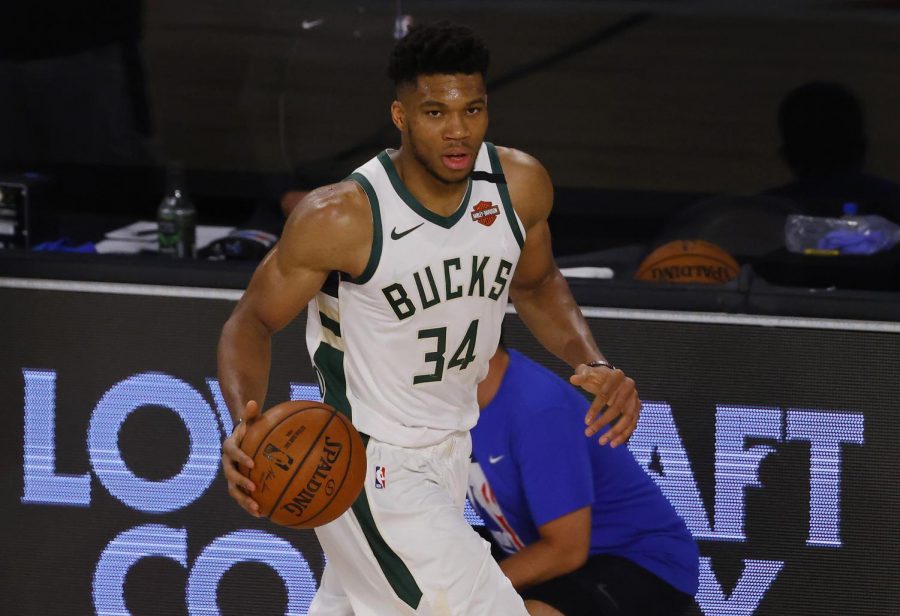 Giannis Antetokounmpo of the Milwaukee Bucks moves the ball up the court against the Orlando Magic on Aug. 22. The NBA will resume play in a little more than a month.

Wait, already? I know the NBA final was done not so long ago, but the rumor has it that the NBA resumes on December 22nd. Many NBA players are already in talk about the trade, and Chris Paul has been the hottest name on any NBA news. I feel like if you dig enough articles, you will be able to find that Chris Paul is going to every single team in the NBA. This article will focus on usual suspects for the playoff, and some dark horses.

With LeBron James and Anthony Davis (and JR Smith), this team is always in a conversation for winning a championship. The rumor has it that the Lakers have been trying to acquire LeBron’s good friend, Chris Paul, but what about Rajon Rondo? Did you forget about their relationships? As long as they don’t lose key players, they should be favored to repeat.

The joke about “you blew 3-1 lead” meme is probably all over the internet for Doc River’s Clippers team. Both Kawhi Leonard and Paul George have been crucified ever since the loss against the Denver Nuggets, but no one can deny the fact that this team has talents. With Tyronn Lue as a head coach, the Clippers hopefully make a difference for the upcoming season.

It was unfortunate that the Cinderella Nuggets team lost against the Lakers, but it was impressive to see their win against the Clippers. With more experiences, the Nuggets should be ready, and addition of any free agents can make this team lethal.

The number five seed in the NBA final game? Jimmy Butler led Heat have done phenomenal jobs after beating both the Milwaukee Bucks and the Boston Celtics. They even brought to game six against the Lakers to make LeBron James and Anthony Davis nervous. With more experiences from youngsters, this team will have a good shot to represent the East again.

It was depressing to see the Bucks disappear in the playoff that early. Before the NBA season stopped due to COVID-19, the Bucks were promising. It is difficult to tell what would happen with Giannis Antetokounmpo in free agent, but this team will still be an elite team in the East.

When the Bucks lost against the Heat, I thought that the Celtics will represent the East to match against the Lakers. The Celtics have a solid roster with Kemba walker, Jayson Tatum, Jaylen Brown, and Gordon Hayward. They cannot be underestimated.

There are many questionable marks in this team as Kevin Durant comes back from a serious injury. The season all depends on how much Durant is back in the form. If Durant is at 100%, the Nets can beat any team in the East. If he is at 80%, Kyrie Irving and other Nets players have to step up. It is also exciting to see some tension between the Nets and the Lakers (and Warriors, too?)