Is the NFL Fumbling its Response to the Pandemic? 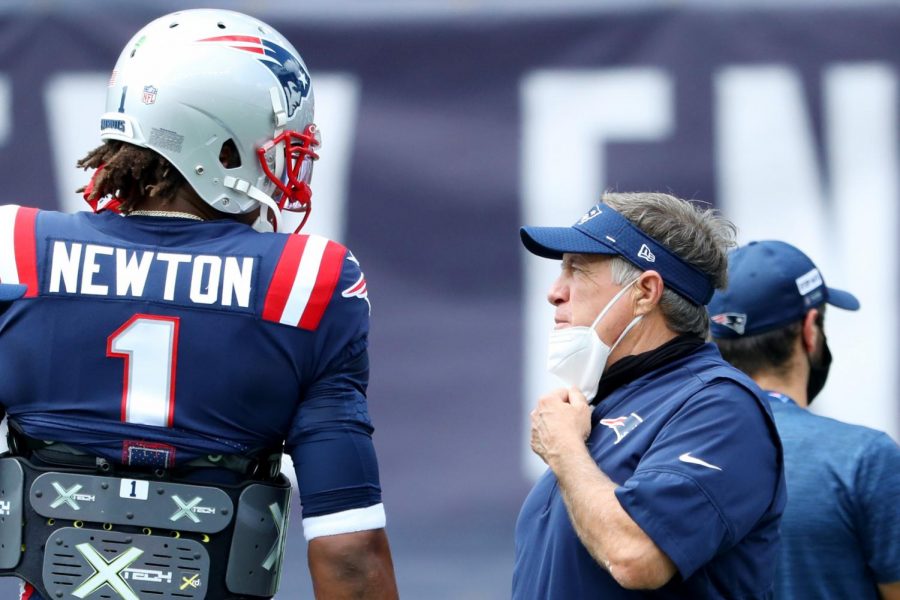 New England Patriots head coach Bill Belichick talks with Cam Newton before the game against the Miami Dolphins at Gillette Stadium on Sept. 13, in Foxborough, MA. Newton is one of several NFL players currently out due to COVID-19.

In Week 5 the Raiders received news of a positive case and the Jets announced a presumptive-positive on Friday and shut down all in person Operations. As of Friday night the NFL had rescheduled 2 games, the Titans-Bills game will now be played on Tuesday Night, if that game is played then the Bills-Chiefs game originally scheduled for Thursday Night will be played later that weekend. The Patriots- Broncos game will be moved from Sunday afternoon to Monday at 5 p.m.

The NFL laid out their Covid-19 protocols before the season began. All players are tested daily during the regular season, except for game days. Any player, coach or staff who has an inconclusive result can be cleared for the game with a negative test done at least two hours prior to kickoff. The rules for returning to action depend on whether that player I showing symptoms or if they are asymptomatic. If they are showing symptoms then they must wait at least 10 days after they first reported symptoms and at least 72 hours after the last symptoms occurred, then they must be cleared by the team physician. If they are asymptomatic they must wait until 10 days after the initial positive test or two negative tests separated by 24 hours.

Following the Week 4 outbreak the NFL reviewed and adjusted some of their rules. The changes include:

A complete ban on gatherings outside of club- related meetings
Installing leaguewide video monitoring systems to ensure protocols are followed.

With over three billion dollars in player salary and nearly $7 billion dollars in television deals it is hard to envision the NFL shutting down operations, but could they do more to protect their players? With Covid-19 cases spiking all around the nation, with more than 40,000 a day is that money worth the players health?

One option the NFL could explore would be to put its players in type of bubble. In this bubble they players would all stay at a hotel for the rest of the season so everyone they come into contact with could be closely monitored. They wouldn’t be able to do it quite the way the NBA did, with everyone all living on the same campus, but it would certainly give the NFL better control and possibly keep the players safe. Of course, before any decision could be made on that it would have to be voted on by the NFL Players Association, which isn’t likely.

Ultimately the NFL is a business and the players are both the employees and the product. If the NFL can’t get a handle on these Covid-19 outbreaks soon the Owners and the Commissioner are going to have to decide what is more important to them, billions of dollars or the safety of the players?