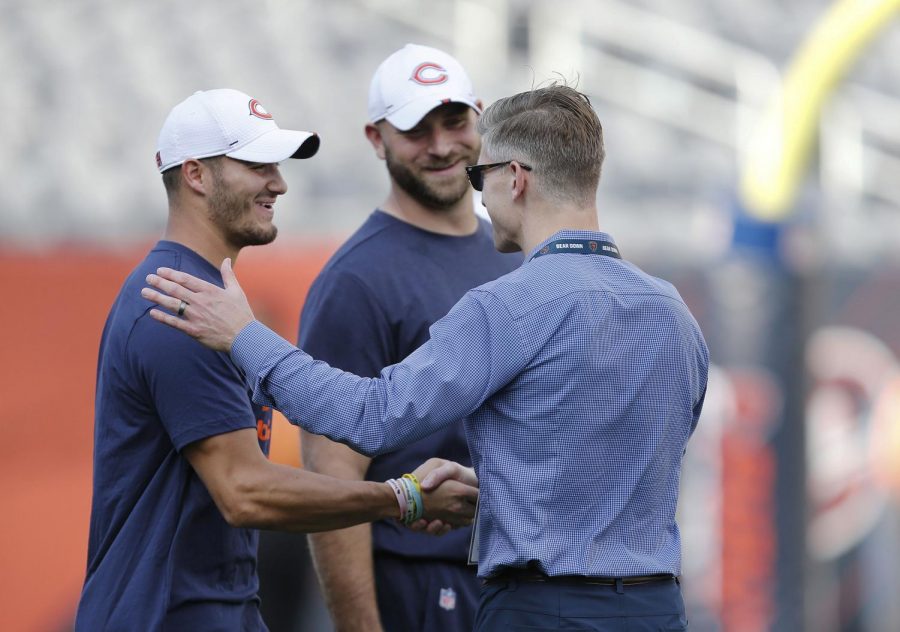 Chicago Bears quarterback Mitchell Trubisky, far left, might be a great week 2 pickup for fantasy football fanatics. He is pictured with Kyle Long and General manager Ryan Pace of the Chicago Bears at Solider Field on Aug. 29, 2019.

The first week match ups are probably the toughest time for fantasy football managers to know what to do with their guys.

When your first-round pick gives you three points and your “eh whatever, I will draft him” in your 12th round gives you 25 points on the bench. You may wonder “Hmm, is my first round pick a bust and that 12th guy is a breakout player?”

Suddenly, you are Googling your players to see about their season predictions, and you get basically the conclusion that everyone can be a bust and a sleeper.

My advice is that you try to keep your first-round guy for now instead of trying to talk about the trade. They can be slow starters or adjust in their new teams (or they are actually hurt….). Plus, their value is a little bit lower than you would like it to be even if you found someone in your league interested in your guy.

I also would not jump on the hot hand after week one. Someone that you have never heard of in your life suddenly got 12 receptions and 150 yards with three TDs in first week. The likely scenario is that that person will come down to the Earth unless that was achieved by the primary receiver getting hurt, which is a different story. As long as a team’s first WR is available, the 3rd wide out is less likely to continue because either the first wide receiver will bounce back the next game or will demand more targets from the coach and the quarterback.

However, if the main wide receiver or running back is hurt, and the guy scores a good amount? Yes, that’s your guy. Put your mouse right on that FA (+) button right away on Sunday night.

I really believe that Chase Edmund will be Arizona’s primary running back at some point (or not, and I will waste my bench spot for the rest of the season).

Anyway, here is my suggestion for pickups after week 1.

Mitchell Trubisky (Chicago) – He has a nice matchup against the NY Giants, and he should have a good game. He is not really running much, but he should be a good streaming option if you are uncertain with your QB this week.
Baker Mayfield (Cleveland) & Joe Burrow (Cincinnati) – This is a more exciting matchup between two rookie QBs (well, Mayfield has a little more experience) between Mayfield and Burrow. Both will try to throw a lot and run as much as they can. Not a bad matchup for streaming either Mayfield or Burrow.

Christ Thompson (Jacksonville) – If you are in PPR league, his value is much higher. He is not a traditional RB that carries 20 times a game, but he will still carry between 5 and 10 and give you a few catches. He is worth a flex spot.
Chase Edmunds (Arizona) – I believe in Chase Edmund! I just don’t think that Kenyan Drake can keep it up with his health. Edmund had potential to handle a starter’s workload last year. (He rushed 27 times for 126 years with 3 TDs and 2 receptions for 24 yards). If you are Drake owner, definitely keep Chae Edmunds on your bench in case anything happens with him.
Devonta Freeman (Free agent) – It was not the best year for Freeman as his total yards and the number of TDs decreased. However, he is still a serviceable RB if he is given an opportunity. With possible injuries and positive COVID-19 test potential, Freeman will be playing for a NFL team someday.

Allen Lazard (Green Bay) – I believe that Aaron Rodgers will have a big season this year, which means the second wide receiver, Lazard will have a good fantasy year as well. If Davante Adams has to miss any time for any reasons, Lazard will enter as potential top 10 wide receiver.
Anthony Miller (Chicago) – The matchup against NYG makes me like the Bears quarterback Mitchell Trubisky. Miller showed that he can still perform well even with Robinson as No.1 wide receiver. Miller should have a good game this week.
Alshon Jeffery (Philadelphia) – With injury, Jeffery is often left on Waiver. When he played, he got a good amount of receptions and targets. With Jackson being aged and Reagor being inexperienced, Jeffery can step up to be a No. 1 receiver in the Eagles’ offense.
Corey Davis (Tennessee) – Okay, so everyone is hyped about A.J. Brown, but his health is a concern. Someone has to step up, and Davis who showed some potential last year should be the guy.

C.J. Uzomath (Cincinnati) – The rookie quarterbacks tend to rely on their tight ends. Uzomath may not be a bad option if you are struggling to find a tight end option for this week.
Ricky Seals-Jones (Kansas City) – Seals-Jones is a backup tight end in case Travis Kelce is down for any reasons. With the current pandemic, anything can be possible, so I will snag him on your bench in case that happens. But, yeah I wouldn’t start him without Kelce’s absence.