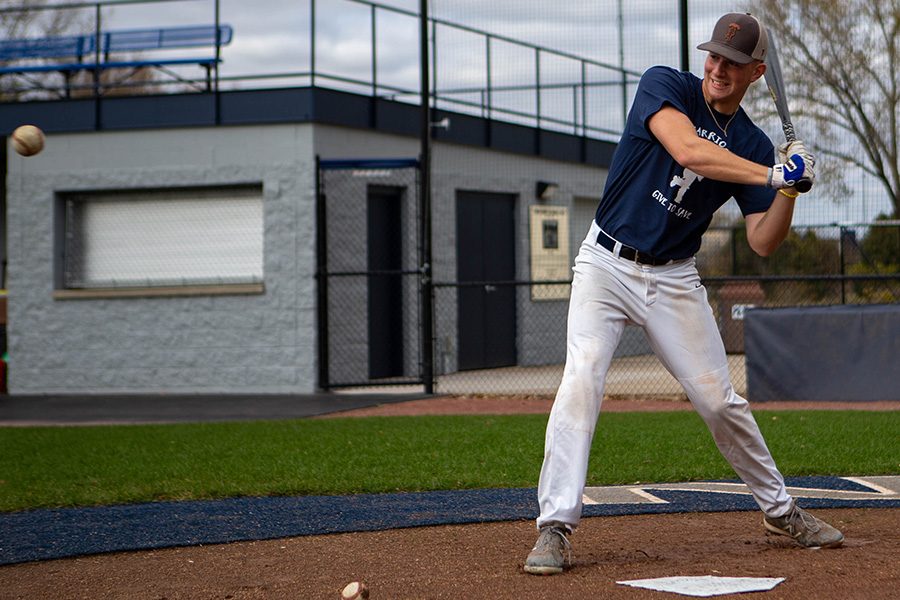 Madison College baseball player Pierson Gibis was the inspiration for a blood drive that was held on campus this week. He is thankful for the donors who provided the more than 100 units of blood he required during his battle with cancer.

When Pierson Gibis was diagnosed with cancer three years ago, the first thing he asked the doctors was if he could play baseball again.

When the doctors said yes, Gibis looked at this dad and told him “I’m going to go through this for a year, then take a year off to get my strength back. Then go to Madison and play.”

Now a sophomore catcher on the Madison College baseball team, Gibis can look back and see that things worked out as he had hoped, but it was a long road to recovery.

Gibis found out he had a rare form of cancer, Rhabdomyosarcoma, on Aug. 17, 2016. The disease is a cancer of the muscle, bone, and connective tissue.

His scheduled 54-week treatment plan of chemotherapy and radiation actually lasted 70 weeks. During that time, Gibis lost about 60 pounds and had to receive over 100 units of blood to help keep him alive.

When they first learned about his diagnosis, the Gibis family didn’t really have time to react.  They were told what they had to do to get him better, and they just took it one day at a time.

Pierson credits his family for being his biggest support system during his battle with cancer. His mom, Jan, and dad, Ryan, were there every day to help him, while his brother, Brandon, came home every other  week.

“I don’t think I went a single day without seeing her face,” Gibis said of his mom. “My dad was working a little more, but I saw him every day. He would take me to play baseball or to go hit or throw.”

“My older brother was playing baseball at UIC (University of Illinois-Chicago) at the time and had other obligations, but he was at the hospital every other week and I got to see him a lot at that time and, it was nice to see him and for him to be there for me.”

Immediately after his diagnosis Gibis was not able to do much.

“I was either laying in a bed or sitting in a couch for most the time.  I also had really bad muscle atrophy in my legs, so couldn’t sit in a squat or run,” he said. “I couldn’t go be my normal self. I didn’t have much of an athletic life at the time.”

Pierson’s first time playing baseball after his diagnosis was on March 23, three months after he finished everything.  He went to the Hitter’s facility in Racine to pop his head in and say hello to everyone who was there.

They asked him if he wanted to play in the scrimmage that was happening. Of course he did, and in his first two at-bats in about two years, Gibis got two hits.

“It was just really cool,” he said.

But that wasn’t his most memorable baseball moment. Neither was playing in his first collegiate game.

The most memorable moment for him was getting drafted by his favorite Major League Baseball team – the Chicago Cubs.

“It was something that definitely was unexpected,” he said. “Not that many people get to wear that on their chest.  It is just a pretty special thing for me.”

Throughout Pierson’s treatment, he made contact with Madison College’s baseball’s head coach Mike Davenport.  He asked coach Davenport “would you take a chance on me if I came here?”

There was never a question about it, as coach Davenport told Gibis “we would love to have you.”

He said he is thankful Davenport gave him an opportunity that not many others would have.

Gibis’s first career collegiate hit came on March 19, when Madison College was playing Morton College. He singled to right field in the fifth inning, and eventually came into score. Madison College would go on to win the game 11-1.

Having had a personal fight with cancer, Gibis said he would tell anyone going through this just to take it one day at a time and to stay positive.

“Throughout all of it, it felt like the same things kept happening over and over and over again and I was in the hospital an insane amount of time,” Gibis said.  “For a while I thought that it never would end, and I would never feel better or have a life again. Here I am. It really does end one day, I would just say keep that in mind.”

Madison College held a blood drive on Oct. 28 and Oct. 29 in honor of Gibis.

Athletic Director Steve Hauser came up with the idea to help Gibis give back, in thanks of the donors who provided him with the 100 units of blood he needed.

“It is something that is really important to me and means a great deal to me,” Gibis said.