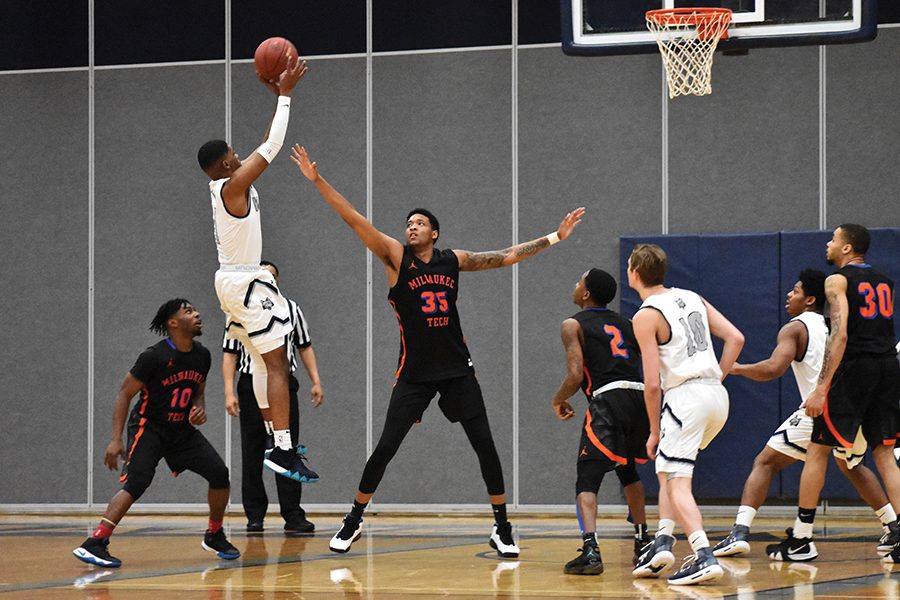 Madison College guard Jalen Addison pulls up for a shot during his team's game against Milwaukee Area Technical College on Feb. 16

Three straight double-digit losses to end the season can make it tough on a team that’s a few days away from starting post-season play.

But in the case of the Madison College men’s basketball team, those losses came against some tough competition that could help prepare them for what they’ll face in the tournament.

In each of those games, Madison College had little difficulty scoring, but couldn’t come up with enough defensive stops to pull off the upset.

The WolfPack lost to third-place Rock Valley College, 82-72, on Feb. 11. Rock Valley finished with a 9-4 conference record and a 19-6 overall record.

Madison College hung close with Rock Valley, and even took a brief lead at 57-55 with 8:36 left in the game. But Rock Valley went on a 14-0 run over the next four minutes to take command of the game.

Jalen Addison led Madison College with 27 points, hitting 10 of 20 shots he took. Nathaniel Buss scored 19 and Sean Suchomel added 13 to round out the double-digit scorers, but the rest of the team only added 13 points total.

Madison College then allowed more than 100 points in consecutive games for the second time this season. The WolfPack fell to conference leader Triton College, 113-90, on Feb. 13 and to conference runner-up Milwaukee, 110-93, on Feb. 16.

Triton College took command in the first half, jumping out to a 61-43 halftime lead. Madison College was never able to close the gap in the second half.

A whopping seven players scored in double figures for Triton College in the game. Madison College was led by Buss, who scored 26 points, and Addison, who netted 19 points.

The game against Milwaukee was similar. Milwaukee raced out to a 62-33 lead and was in command the rest of the way.

Addison scored 20 points and Adam Anhold added 18 to lead the WolfPack. Alex Easterday scored 15 while Buss had 12 to round out the double-digit scorers.

Scoring hasn’t been a problem for Madison College this year. The team averages 86.4 points a game.

Defensively, though, the team has had its struggles at times – especially against the stronger competition. Madison College allows an average of 84 points a game.

Unfortunately, the four triple-digit scoring games the WolfPack has allow this season has skewed that average a little bit. Still the team will need to find a way to hold down those power-house teams to advance in the tourney.

Tournament play will open on Wednesday, Feb. 20, with the NJCAA Region IV Quarterfinals. The winner will advance to the Regional IV Tournament at Harper College in Palentine, Ill., on Feb. 23-24.