Madison College off to 3-0 start, led by returnees Schumann and Trapino 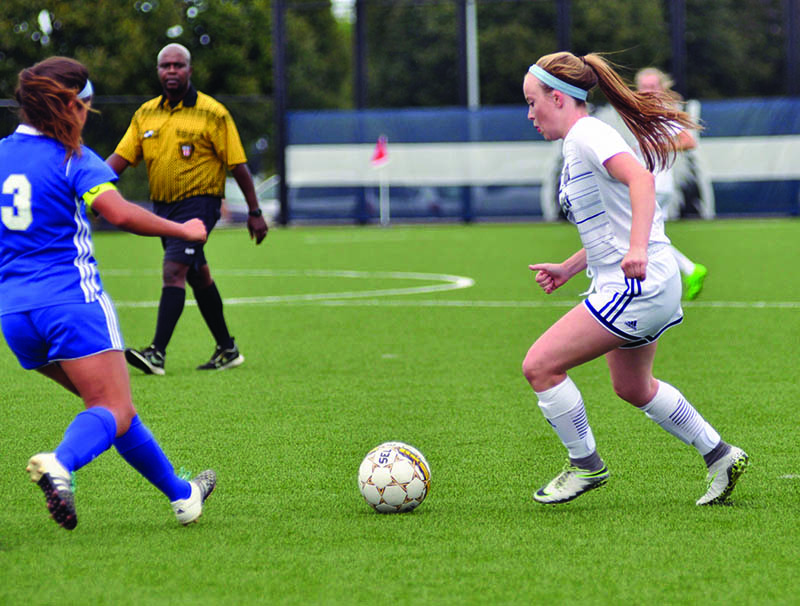 Madison College freshman Kaitlin Satern, right, moves in to steal the ball from an opponent during a home game on Sept. 7.

It is a new season, but it has been the same result so far for the Madison College women’s soccer team – dominating win after dominating win.

The WolfPack has played three matches through Sept. 8, winning all three and outscoring its opponents by a whopping total of 22-1.

Schumann scored her team’s first four goals, including two just over a minute and a half apart to end the first half. Esther Noriega and Peyton Trapino both added second half goals to wrap up the scoring.

Schumann leads the team in goals scored with seven so far this season, continuing the record-setting pace she had last year. Trapino has three goals and 10 assists already this season, including four assists in the game against Harper College.

Madison College opened the season on Aug. 29 with a 7-0 victory at Rock Valley College. Freshman Mary Raemisch led the team with two goals, including the first one of the season just over two minutes into the game. Raemisch had another big game on

Aug. 31 at Illinois Valley. She scored three goals to help lead the WolfPack to a 9-0. Schumann and Trapino both added two goals in the match.

Goalie Kelly Kubicek is off to a strong start this season. She has 15 saves and allowed just one goal in three games.