WolfPack gets big win over Elgin: Victory against No. 2 ranked team has Madison College men’s basketball team ready for start of conference play 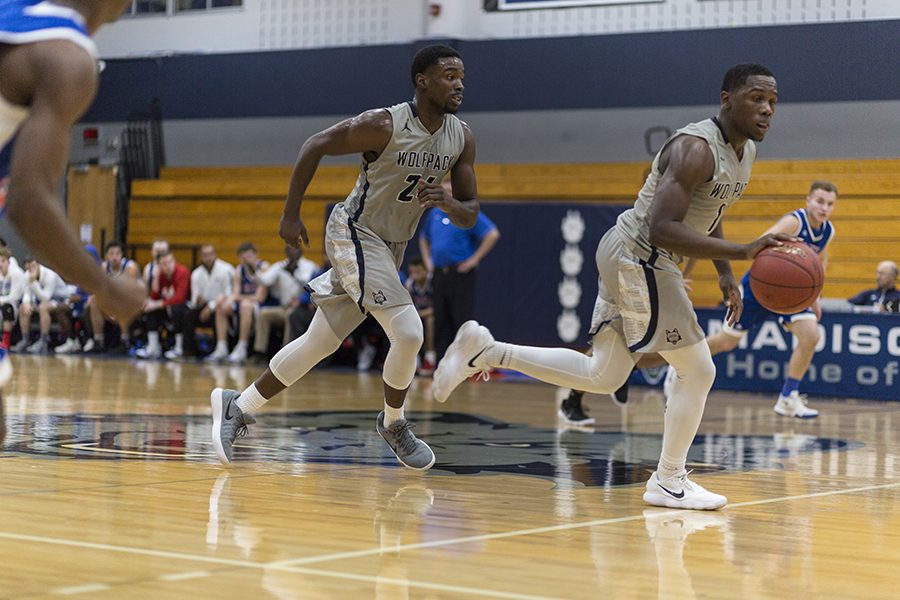 Bill Kegler’s team rode a second half wave of 3-pointers to a 98-63 victory over the No. 2 ranked team in the nation.

So naturally, after the big win over Elgin Community College on Dec. 2, the Madison College coach wanted to talk about defense.

Kegler said the topic came up right away when he visited with a former player following the game.
“The first thing he said was, ‘you have to talk on defense,’” Kegler said. “We tell them that every single day. So hopefully that stuff will start to click a little bit. And once we communicate better defensively, we’ll be so much better.”

Still, no one should get the impression that the coach wasn’t pleased with his team’s performance. He was as happy as the players were with the big win. He just knows that his 6-3 team has work to do if it wants to have a highly successful conference and post-season run.

Even though the 98-point effort was a season high for his team, the WolfPack have been scoring a lot of points this season, averaging more than 80 points a game.

But Kegler wants to see his team give up fewer than the 74 points it now allows a game.

“We’ve still got to give up less than 60-some points in a game, but that’s all right,” Kegler said. “That’s just me being picky.”

Elgin probably would have been happy if Madison College hadn’t scored a whopping 63 points in the second half.

After falling behind by a point early in the second half, Madison College got hot. The team hit 21 of 28 shots in the half (75 percent) including 8 of 10 from behind the 3-point line (80 percent).

Kegler said the 3-point shot is a big part of his offense.

“That’s our season. We shoot a lot of 3s,” said Kegler, whose team averages 21 shots from 3-point range a game. “We talk a lot about getting to the rim and then pitching out for higher percentage shots. We’re capable shooters so we may as well shoot them.”

Tyree Young led the team with 25 points, Jezzriah Burton had 24 points and Alex Easterday scored 21 points. Burton hit an impressive 5 of 8 three pointers in the game.

Two of the three of them are the team’s leading scorers for the season as well. Young scores 18.2 points a game and Burton scores 13.4, while Anthony Johnson adds 12.7.

Kegler said he’s got several players who are capable of providing a scoring punch for the WolfPack.

“It’s somebody different every game,” he said. “When you put up 98 points you’re going to have guys scoring that many, especially when you only have eight guys. It’s got to come from somewhere.”

Kegler said the difference between the first half of the game against Elgin, which saw Madison College take a 35-31 lead, and the second half was that the team sustained its effort for longer periods of time.

“And the guys coming off the bench brought energy too, so we didn’t have any lulls in our performance,” Kegler added. “Those guys came in and kept the tempo up that the guys started the half with.”

The coach said he likes the way his team is playing on offense.

“They do a good job sharing the ball,” Kegler said. “When Tyree (Young) has an open layup but he gives it ahead to (Nathaniel) Buss, that’s a good sign of a team that cares about each other. Tyree gave up 2 points to get an assist, so they’re playing for each other, which is good.”

Still, as nice as the victory felt, Kegler and the team have a bigger goal in mind this year.

“At the end of the day, you want to win games in February and March and not December, so we just have to keep getting better and be ready when March comes around,” Kegler said.

For that to happen, the coach plans to continue to push his team to improve its defensive effort. That’s something players can expect to work on for the rest of the season.

“Every day,” Kegler said. “Every day we work on it. We need to get better at it. We just have to get them to believe it. When they believe it, we’ll be good.”