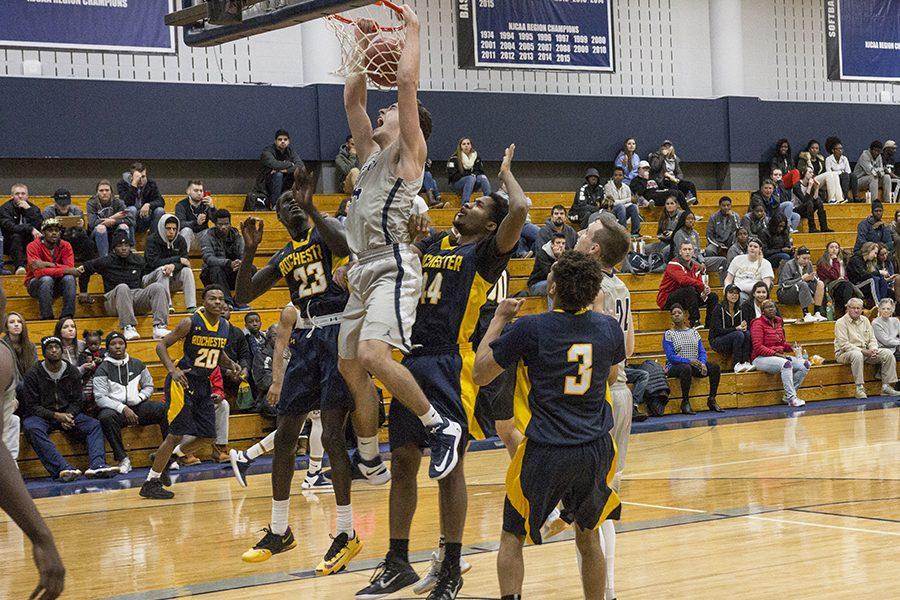 A wild second half saw Madison College fall behind by nine points, rally to a 10-point lead and then hang on for an 88-85 victory over new in-state rival Bryant & Stratton College at home on Nov. 30.

The biggest swing happened during a seven and a half minute stretch that was fueled by big 3-pointers, including two by Marquis Harris. As a team, Madison College hit 10 shots from beyond the 3-point line during the game.

But on the next possession, freshman guard Stavon Staples nailed a 3-pointer to give the WolfPack the lead for good. Staples finished the game with a career-high 19 points and has scored in double figures in three straight games. He converted on 4 of 8 shots from beyond the arc.

Marquis Harris, another freshman guard, also set a new career-high mark in scoring with 16 points and six assists.  Sophomore Shane Waldon had 14 points and 12 rebounds for his first double-double of the season. Paul Schmelzer III was the only other WolfPack player in double figures, also scoring 14 points.


Rochester CTC 84, Madison College 75
Madison College played tough against No. 2 ranked Rochester Community and Technical College, but surrendered the lead with 10 minutes left and was never able to get it back in an 84-75 loss at home on Nov. 22.

Both teams had a hot shooting night. Madison College converted on 37 of 72 shots, and at 51 percent was just a few percent points higher than Sauk Valley. The two teams combined to hit 25 of 53 shot attempts from 3-point range.

Walden scored 21 points to lead Madison College, tying his season high total. Joel O’Donnell had 13 points and 10 rebounds for his second double-double of the season.