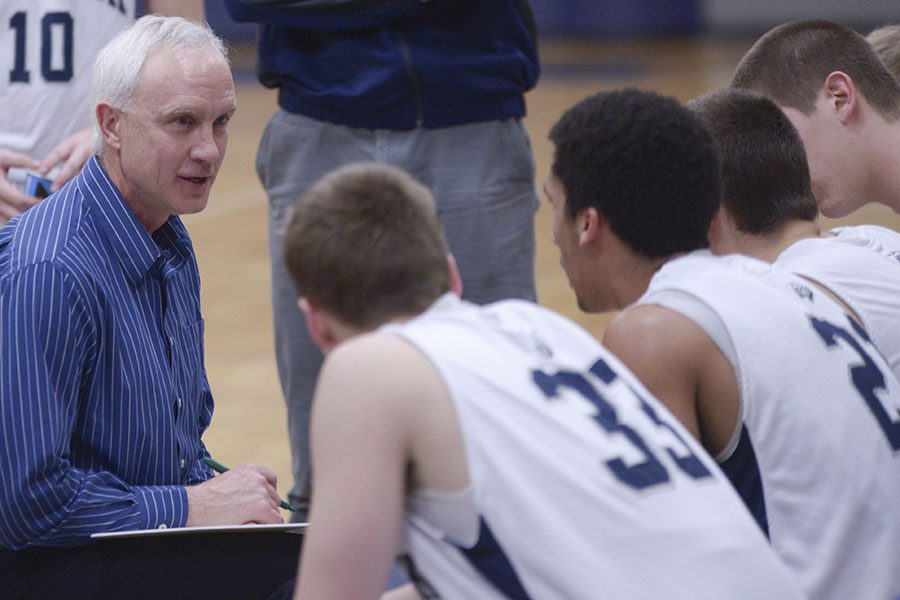 Scot Vesterdahl, left, is retiring after nearly 15 years at the helm of the Madison College men’s basketball program.

When Scot Vesterdahl looks back on his coaching career at Madison College, chances are he thinks more about the impact he has had on the lives of his student-athletes than any wins or losses.

“To be a good coach, you have to fill and play many roles,” Vesterdahl said. “Obviously, it’s the coaching piece. … When your players have a comfort level of calling you about not just basketball about other things in their life or if they need help, that says something, they feel comfortable with you as a teacher and a coach.”

Vesterdal’s upcoming retirement from coaching was announced at the Athletic Department’s annual banquet, when he was inducted into the college’s Athletic Hall of Fame.

The fitness center and intramural sports director, Vesterdahl has coached at Madison College for 14-1/2 seasons. During that time he compiled a 249-242 record.

More important than any record, though, has been the life lessons he was able to share with his players.

“One of the things that was really important to me was quote-on-quote paying it forward,” Vesterdahl said. “Things I got as youngster from people who were volunteering their time, I would hope I could pay it forward.  What I received from them, I would hope to give to other people.”

“The funny thing is now I got kids that are not kids anymore, that are young men who had played for me who are now coaching, who are now paying it further to another generations,” Vesterdal said.  “So I think one legacy would be we got the opportunity to impact a couple generations of kids with coaching, and guidance and integrity.”

Assistant coach Justin Einerson has only worked with Vesterdahl for one year, but has come away very impressed.

“The best advice he gave me about coaching to stay relentless and believe in your dream,” Einerson said. “He is never the type of person who tells you can or cannot do something if you are a player or a coach.”

“Coach V is about everyone around him. What really makes him good, he prepares players, coaches, managers for whatever their next step is,” Einerson said.

Vesterdal has been big on education throughout his career.

“The constant message has been do things best of your ability, do it with integrity, be held accountable,” Vesterdahl said. “If you are expected to do something, do it to the best of your ability or you will be held accountable. Make sure you are achieving in the classroom. Because for every player who played for me here, they were not going to make a living playing basketball, they weren’t in the NBA. How can you use basketball to get a degree?

“We always expected them to achieve academically, and that was a huge push for us. Doing things with the best of your ability, doing things with integrity. If you say you where going to do something, do it. If you say you where going to be there, be there on time. Be a team person, because it is not all about you. The best teams everybody sacrifices a little bit of they want for the better of the team. And all of the lessons are true in life.”