Coach sees positive signs from team, hopes best is yet to come 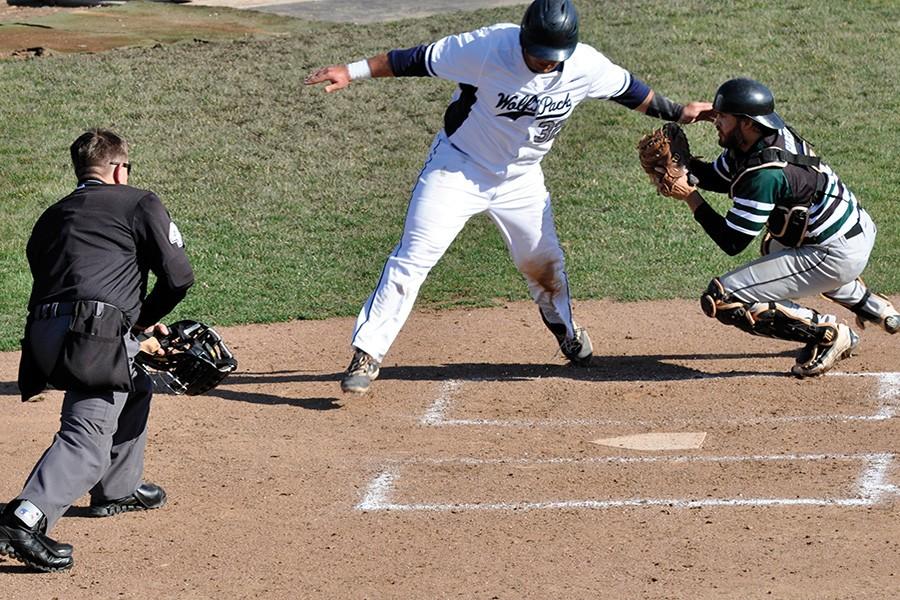 Madison College’s Carson Carmody attempts to dodge the tag on a play at the plate against Kishwaukee College at home on March 28. Madison College lost the game, 8-5.

By beating in-state rival Milwaukee Area Technical College in both games of a doubleheader on April 3, the Madison College baseball team drew closer to a .500 record.

After the pair wins, the WolfPack stands at 10-11 overall and 5-1 in the North Central Community College Conference.

“We have many new players on this year’s team, so we are definitely a work in progress,” Davenport said. “This is a very talented group.”

Davenport has set up individual goals for each player, they include: being a good teammate, representing yourself, the program and the college in a good manner, and compete.

“Show up with a plan today to be better than yesterday,” he said. “Invest in the process of growth and improvement. Evaluate and adjust your plan if needed.”

Davenport has also created one goal for the whole team, “to be playing our best by the end of the season.”

In the doubleheader against Milwaukee, the WolfPack showed just how well it can hit. Madison College record double-digit hits in both wins.

In the first game, Madison College won, 8-2, after posting 10 hits in the game.     Chris Lund, Ty Jandrowski and Ryan Makuski each had two hits for the WolfPack. Lund scored twice and hit a double.

The second game saw more of the same as Madison College won 14-4, scoring their runs on 14 hits and six errors by Milwaukee.
Nick Kanavas had three hits, scoring three runs and driving in two. Lund also had three hits in the game, including a double.

Ty Jandrowski and Simon Maurice both had two hits to lead Madison College, but the team got only two other hits in the game.

The team had 16 hits as Ryan Makuski, Nate Schmidt and Drew Steinmetz each had three hits in the game. Schmidt hit a home run while Makuski and Steinmetz both added doubles.

Kian O’Brien had three hits for the WolfPack, including a home run and a double. Chris Lund was the only other Madison College player with multiple hits in the game.

Kishwaukee won the game with a three-run home run off of reliever Jared Horton in the top of the ninth inning.

Ryan Makuski, Bryce Plate and O’Brien each had two hits for the WolfPack. Makuski, Chris Lund, Trevor Tunison and Zach Bailey each hit doubles in the game.

Chris Lund led all Madison College batters with three hits, including a double. O’Brien scored three runs after reaching base on a single, walk and being hit by a pitch.