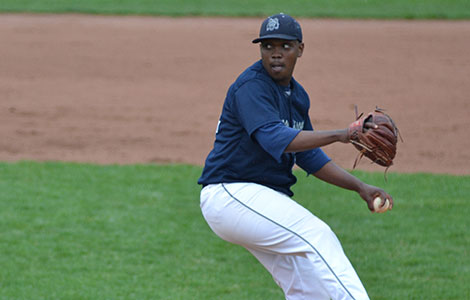 With just a May 3 doubleheader remaining on its regular-season schedule, the Madison College baseball team has won 15 straight games, including 10 conference games.

In fact, the team hasn’t lost since dropping the second game of a doubleheader on April 12.

As a result, the WolfPack baseball team now stands at 34-10 overall and has successfully defended its North Central Community College Conference crown after going 23-1 in conference play.

Talk about building momentum for the post-season.

Madison College has been a tough team to score on as of late. Heading into the May 3 game, it had posted four-straight shutouts.

The WolfPack hasn’t given up more than four runs in a game since a 16-10 slugfest with Harper College on April 18.

Tournament play begins this week for Madison College. The NJCAA Region IV Sectional Tournament is scheduled for May 9-10, with the winner advancing to the regional tournament in Schaumberg, Ill., on May 15-17.

Madison College 1, Kankakee Community College 0
An RBI single by Brandon Gibis in the bottom of the second inning accounted for the only run in Madison College’s 1-0 win over Kankakee in the first game of a doubleheader on May 2.

Gibis had two of Madison College’s three hits in the game and pitched the final out to earn a save.

Madison College 3, Kankakee Community College 0
Although they gave up six hits, Madison College posted its fourth straight shutout with a 3-0 win over Kankakee in the second game of the doubleheader.

Brandon Parr earned the win for the WolfPack, pitching six scoreless innings. Ryne Blanton pitched the final inning without allowing a base runner to earn the save.

Hurt drove in one run in the first inning and two runs in the second inning to spot Madison College a 3-0 lead.

Gibis, Mike Jordahl, Courtney Watkins and Simon Maurice each had two hits for the WolfPack.

A double steal by Tony Butler and Brandon Gibis gave the WolfPack a run in the first inning.

Then, trailing 2-1, a Sam Hurt single tied the game and a groundout by Travis Hamilton scored the go-ahead run.

Hurt and Matt Cole had two hits in the game, while Gibis scored twice.

Ryne Blanton pitched the win for the WolfPack, giving up two runs on just three hits in seven innings.

Madison College 10, Rock Valley College 0
A five-run second inning gave Madison College all the runs it would need in a 10-0 victory in the second game of the doubleheader.

Cole doubled and Hurt tripled to key the big second inning rally. Cole and Mike Jordahl finished the game with three hits to lead the team.