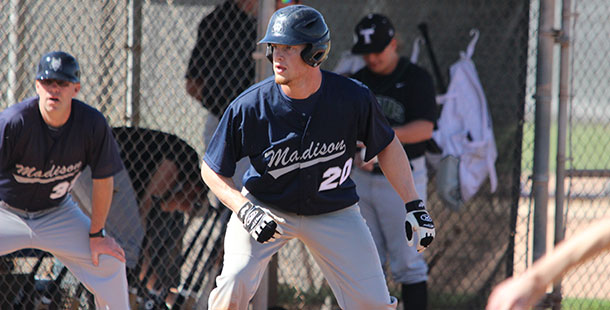 “Twice we ended up in a scenario where three teams have one loss in an uneven tournament. Last year and then two years prior to that, so we’ve been in the hunt,” Coach Mike Davenport said.

Last year, injuries in the pitching staff weakened the team and contributed heavily to the WolfPack falling short of a national championship.  But with a strong group of returning players as well as several blue-chip freshman joining the team, Coach Davenport is extremely confident that this season will culminate in the WolfPack winning the ultimate prize.

Leading the group of returning sophomores is second baseman and first team all-American Danny Krause, who led the team with a .433 batting average in 43 games played and spent last summer with the Mallards.  Also returning is pitcher Nathan Hoffman, who last year had an era of 2.14 and a 9-1 record.

Over the past several years the Madison College baseball program has earned a national reputation. Coach Davenport thinks the hard work he puts into developing his young players is the main key to the Wolfpack’s success.

”We are a team that probably plays more guys, platoon core guys for a longer period of time than most programs that are competing at the national level, but my job here I feel like is to develop our players and it’s tough to develop players game wise if they never get to play,” Davenport said.

Spring camp started March 14 when the team headed down to Arizona where they played almost a game per day until March 22, going 6-5. Among the highlights was a no hitter pitched by Rex Morrow against Williston State College on March 18, completing a sweep of the team.

“I didn’t know anything about it until the third or fourth inning” Morrow said of his performance “In the fourth inning I was like … come out here and be dominant and throw strikes and don’t worry about anything else.”

Morrow, a sophomore, played both infield and pitcher last season. He went 1-0 in 40 games, earning 30 starts and a .323 batting average.