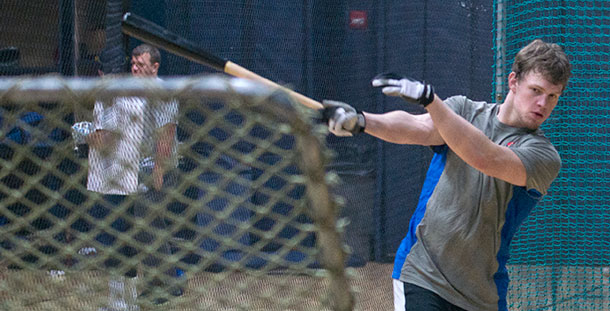 Practice for the baseball season has already started. Players have also been busy raising money to help cover the cost of their spring training trip.

Before the umpire hollers “play ball,” most universities and colleges are hearing “pay ball” during the offseason.

Davenport and the WolfPack baseball team have not only their regular-season play, but their pre-season spring trip as well. The multi-team event in Orlando, Fla., is a premiere event, Davenport said, and its quality competition gives the WolfPack experience against top teams from different regions and philosophies.

Orlando would be a no-go, if not for fundraising efforts by the baseball team.

This is a microcosm of fundraising importance in creating and maintaining a successful college sports program. When or if funds provided by the college aren’t sufficient to cover season plans by coaches, fundraising dollars help close the gap.

A spring break baseball tournament in Florida created the necessity for a unique fundraiser event – the 100-inning game. Players and coaches solicit sponsorship funds from businesses and the public for the marathon event with WolfPack players facing each other in an exhibition event.

The WolfPack faces teams from Division I and II, including a few that are yearly powers on the national scene. They also have the chance again this year, to face professional baseball players who may be just years from reaching the major leagues.

Madison College will face the Lakeland Flying Tigers – the Single-A affiliate for the Detroit Tigers. Davenport says it’s invaluable experience – a plus created by a yearly scheduling disadvantage.

“For some reason, Madison College is always a week, or so, behind most other junior colleges, so there are almost no teams for us to play the final few days, because their spring break started earlier and were playing before we arrived,” Davenport said. “So the (organizing group) found games to fill the rest of the trip and one game is against players from the Lakeland Tigers.”

This isn’t the first time the WolfPack have faced players making a stop in the minors, on their way to the majors. Madison faced the Milwaukee Brewers’ minor league affiliate in a previous Orlando event and Davenport said those WolfPack players can now say they faced major-league hitting and pitching, just a year or two before seeing them play on national television.

Experiences like this are made possible, in part, by the baseball team’s fundraising efforts. Davenport said funds collected are used toward the travel expenses, with the players paying even portions of the remaining balance.

“Fundraising is important, as is the support of Madison College as far as budget for our athletic programs. We travel well with safety and security on charter buses and this is an experience that could be missed, if not for the fundraising efforts of the team.”

Davenport said outside of the spring training trip, 100 percent of other funds raised by the team go directly to the baseball team’s scholarship fund.