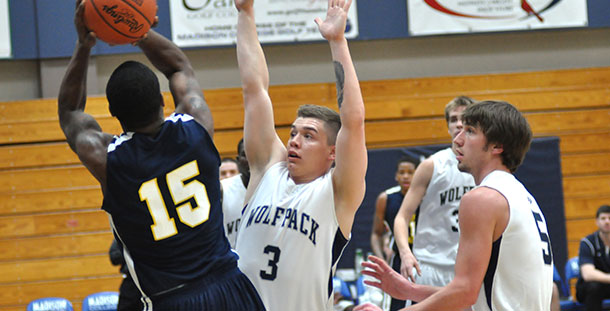 As the regular season draws to a close, wins continue to be few and far between for the Madison College men’s basketball team.

The WolfPack has won just once in its last six games and has a 5-23 overall record, 2-10 in conference play.

In its most recent game, Madison College fell to Rock Valley College, 87-77. The WolfPack fell behind by double-digits early, but fought back to tie the game late in the first half.

But after withstanding the Madison College surge, Rock Valley took a 38-31 halftime lead and held on throughout the second half.

A strong night by Fumbanks helped lead Madison College to a dominant 73-48 victory over Wilbur Wright College on Feb. 13.

Fumbanks scored a season-high 26 points, including hitting 5 of 6 from behind the 3-point line. He also grabbed 10 rebounds.

Overall, it was a strong night shooting for the WolfPack. The team hit 48 percent of its shots from the field, compared to 33 percent for Wilbur Wright.

Xavier Robinson scored 10 points and had four rebounds, while Ruka added nine points for the WolfPack.

A close contest on the road came down to free throws, and Milwaukee hit enough to propel it to a 64-56 victory over Madison College on Feb. 9.

Milwaukee hit 27 of 34 free throws in the game, including 20 of 24 in the second half. The WolfPack only scored 12 points from the line in the entire game.

Free throws again were the difference as Madison College suffered a close 69-58 loss to Joliet Junior College at home on Feb. 6. Joliet converted on 24 of 34 free throws, while Madison College only made 8 of 17. Both Brandon Holz and Ruka scored 13 points and had 10 rebounds for the WolfPack. Fumbanks added 12 points.