Voting is already secure from fraud in Wisconsin 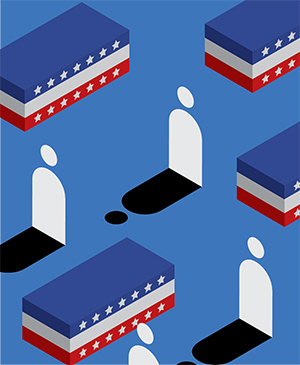 After the 2020 presidential election, rumors circulated across the country that there was widespread voter fraud in multiple states. One of those states happened to be Wisconsin.

While some politicians and auditors claim that there isn’t any convincing evidence of fraud, other politicians still feel certain that there is. Despite multiple claims from whistleblowers, no concrete evidence has held up in Wisconsin courts.

With spring elections happening in Wisconsin, the conversation has all but ceased. Many Republicans have called for new voting laws to ensure election integrity. However, many Democrats have vehemently fought these pending policies out of fear that they would lead to voter suppression.

According to the Wisconsin Elections Commission (WEC), the voting system in the state of Wisconsin is extremely secure. To back up their claims, they have compiled a great deal of research and proof in an effort to try to preserve Wisconsin election integrity.  Some of their findings combat common suspicions regarding the 2020 election, and Wisconsin elections in general.

For example, some concerns have been raised about recount observers. While recount observers are allowed to view election materials and raise objections if needed, they are not allowed to touch the ballots or envelopes. If there is a recount, anyone is allowed to attend. This allows for extra transparency. There are also video and still cameras that help to monitor the process.

Other concerns involve backdated absentee ballots being counted after election deadlines. Wisconsin has a strict “in-hand” ballot policy, where they don’t accept any ballots that come in after the deadline. This means that postmarks on return ballots are irrelevant, according to the Wisconsin Elections Commission. Voters have a responsibility to ensure that their votes are in on a certain date and time.

Another worry that some voters have is the reliability of Dominion voting machines. Wisconsin does utilize these machines and randomized audits have been done to ensure that they are working correctly and have not been tampered with. To see a full analysis of the audits done in accordance with these machines for the 2020 election, head over to the Wisconsin Elections Commission’s website.

Other insecurities that have been raised include uncertainty about pens or markers being used in elections – particularly felt tip pens. Voting equipment in Wisconsin is regularly tested at the local, state, and federal levels for a variety of different types of writing utensils. While it is recommended by WEC that voters use the writing utensils provided, felt tip pens will not disqualify a ballot.

Another point of confusion for some, is that there are duplicate addresses tied to voters. While this may seem suspicious initially, there is a logical explanation.

When it comes to addresses being the same, this is primarily due to college campuses where the students receive mail at a central processing center. The two large locations for this are Northland College in Ashland and Beloit College. This can also happen at large apartment complexes. All of these places are well known by election officials, campus administration and the USPS and don’t account for any kind of fraud.

Other standards that are put into place to ensure election security involve requiring photo identification or equivalent, ensuring that registered voters are in the registration database and giving unique voter registration numbers.

Therefore, the Editorial Board of the Clarion believes that Wisconsin elections are secure and that election fraud rumors shouldn’t discourage individuals from voting in future elections. For more information on elections in Wisconsin and to find out about Wisconsin voting policy and procedure, visit https://elections.wi.gov/faq/2020.