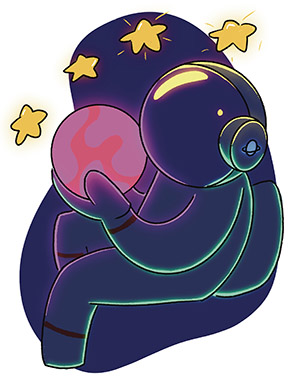 An astronaut views the world from space.

Space is the coolest thing ever. When I was little, I wanted to be an astronaut so bad. I read every single book about space that I could get my hands on. My sister would hear every tiny fact that I learned; no piece of information was too small or insignificant for me to be amazed.
There are so many different aspects to “space.” There are planets, stars, black holes and galaxies. Aliens, too, for those interested in extraterrestrial life. Each of these individual topics are so broad you could spend years researching just one. Planets can narrow down to one specific one such as Jupiter.
You could learn about the chemical and physical makeup of the planet, what the atmosphere is like, what the weather is like, what the Great Red Spot is, how many moons the fifth planet has, the list goes on and on. And that’s for one singular planet in our solar system, which is in the Milky Way, which is in the Laniakea Supercluster, which are all a part of this huge universe. There is no shortage of topics to get interested in.
It can be really easy to feel overwhelmed by the grandness and size of the universe. We humans are so small compared to Earth, and Earth is smaller than a grain of rice in the Milky Way. Even the huge Milky Way is nothing but a crumb inside the Empire State Building of the universe. What a humbling thought. We are so tiny and seemingly insignificant.
And yet people keep going into space! Every day we learn new things about space. Curiosity and awe keep people going back for more and more. It was only 53 years ago that people were first on the moon. In less than one lifetime, we’ve already progressed to the point where there are multiple rovers on Mars. Mars is almost 34 million miles away! That’s incredible!
Space exploration doesn’t just help us learn more about our broad universe, though. It has led to breakthroughs on conditions like asthma, cancer and heart disease. Astronauts have to conserve water while in space, which has led to better ways of purifying water on earth. The International Space Station has also been helpful in disaster response.
I’ll probably never fulfill my childhood dream of becoming an astronaut. However, I can still learn about space every day and reap the benefits of space travel. I love space with all of my heart and hope everyone can find something they enjoy in the universe.