What to call carbonated drinks? 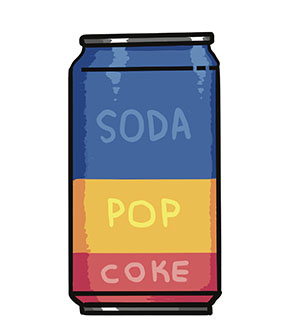 Do you say soda, pop or coke?

When I moved to Wisconsin from the UP, I knew there would be differences from what I was used to. Here it’s a little bit warmer, there’s a time change and people love the Packers. Nothing I couldn’t handle, even if it took some getting used to. However, what I didn’t expect was to be ridiculed for saying “pop.”

Pop is clearly the right word to describe a carbonated soft drink; it literally makes a popping noise when you open the can!

The first usage of this term was in 1812 because of the popping noise corks made when removed from old bottles. It simply makes sense.

What does soda even mean? Apparently, soda is a shortening of the word “sodium.” This mineral is often found in natural springs, so they used it to describe carbonation.

One of my classmates that had moved up north from the south said “soda,” but she was the only one.  Everyone I grew up with said pop, so imagine my surprise when almost everyone in Madison says soda!

After looking into it more, I found out that most of Wisconsin says “pop.” In fact, almost all of the Midwest uses that term for carbonated beverages. Clearly, “pop” is the right choice even if half of Wisconsin got it wrong. So, although I might not be in the majority here in Madison, I know that “pop” is and always will be the correct name.