Minimum wage needs to be raised 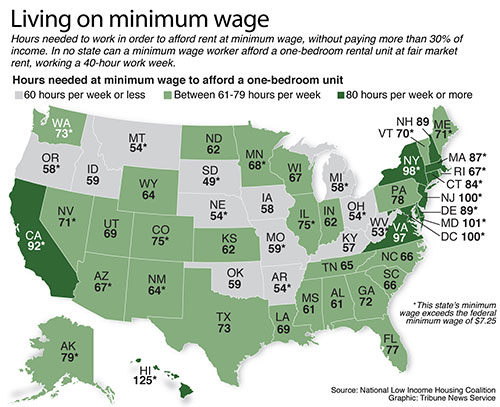 As an online grocery shopper, I currently earn the same amount I did in my freshman year. Now, don’t pity me. My job is a lot of fun, but I do hope to get a much better paying job in the near future. My salary does not define me, but it sure helps with paying bills, eating out, and investing. I have made much higher salaries throughout my career; so winning a higher salaried job should not be too difficult. But, what about people currently making $7.25 per hour. When this group of wage-earners look for a better job, which I am sure they will, will their salary increase be enough? Often, when applying for a new job, employers ask for information about past employers and your role, and salary at the previous job. Although, you’re not required to give them a salary, most people in human resources are aware of wages in different industries. When you start at $7.25, it may be harder to ask for $15 or more, at the next job. So, it does leave you at a disadvantage for reaching a better wage more quickly: it may take a few more years, or a few different jobs to get there. Not a good way to start, but it may be the only way for some of us. For the new Madison College graduates, take great care in negotiating your first salary. It may determine your salary history for the rest of your career.

Proponents of keeping the minimum wage as it is, claim teenagers are the primary population of this group of wage-earners. However, two-thirds of minimum workers are women, most with responsibilities far greater than your average teenager. One friend shared, she wished she had not waitressed after college. She enjoyed the job and did it for over 5 years. However, when she went back to find a job in her field, she was offered a much lower salary than her former classmates because of her prior job. She is still trying to catch up.

When you consider the median rent in Madison for a1-bedroom is $790, it would be impossible for a young family to make ends meet with a low paying job. Furthermore, most CEOs, in any industry, make over 300 times more than the average worker. This disparity is very clear. That is why one empathic CEO made the visionary jump to give his employees a $70K minimum wage at his company, Gravity Payments, which is located in Seattle (an expensive city, to say the least). So, to recent graduates, do not send out your resumes, just yet. The company received several thousand resumes the week of the announcement. Dan Price, the owner and CEO divested some of his investments and took out a mortgage on his million-dollar home to help fund this 3-year phased increase. He realizes it is a huge risk; however, he is willing to give it a try. Dan will also draw $70K a year, instead of his usual million per year. A challenge, he said, but he is committed. Worker productivity and sales has gone up, but will it stay up? We have yet to see. He may still face challenges, but he has made a step in the right direction and should be applauded for evening out the playing field.