Posing nude can teach you about body image 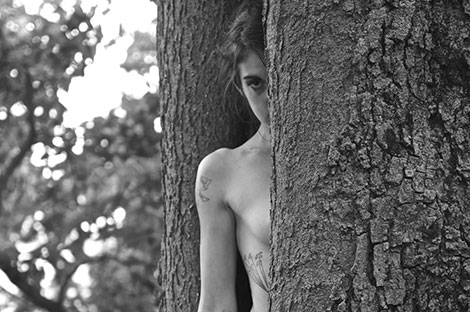 For as long as humans have been making art, they have been depicting the nude human form. The current oldest known piece of figurative art is known as the Venus of Hohle Fels and is estimated to be at least 35,000 years old (Conard). It depicts a nude woman.

When you pose nude for a visual artist you are opening yourself up to changing: changing the way you feel about your body, the way you understand how bodies are portrayed in the media, and quite possibly, the way our society thinks about nudity.

Once you see yourself in a piece of visual art you gain a different perspective. No longer are you limited by your own line of sight. Want to know how your cat sees you? Put a camera on the floor. Or maybe the best view of you is from behind, or in profile. A common rule in photography is that a straight on view from the front is often the least flattering way to show that person, but it is the way we see ourselves most often.

In addition to other angles, working with a visual artist allows you to see yourself through someone else’s eyes, thereby bypassing your own biases. “To me, I see lines and forms, sinew and muscle. …The lines the body makes of its own accord are far more beautiful to me than dealing with the inherent thought placed upon clothing,” says Jacs Fishburne, a model and photographer.

In the finished work, you get to see the best of yourself. You’ve been posed to accentuate the positives and downplay the negatives. The lighting shows what needs to be seen and hides what doesn’t. Perhaps there’s been a makeup artist and hair stylist involved to enhance your natural beauty.

It is then that you start to realize that everything you see in the media is the same way; you’re only seeing the best of the best. The women in magazines have a small army of people working behind them. Actress Angela Kinsey shares what she tells her daughter, “‘Well, Isabel’, she had three people do her hair that day…and then she had someone do makeup, and then they touched her up all day long, …and then they put a fan on her, and made her hair blow like that…I just want her to know that so much went into that moment that we don’t have to give it that much power.”

One of the most common publications to feature nudes is Playboy Magazine. They are, by design, selective in the individuals they feature. For example, the average Playboy Playmate is 5-foot, 6-inches tall and 113 pounds. This is obviously not reflective of the average person, nor does it show the wide variety of possible human bodies. As more people pose nude, the variety of examples for others will also increase and it will become difficult to perpetuate negative stereotypes of the past when your friend, cousin or mother has posed nude.

As more individuals pose nude, it also becomes easier to separate nudity from sex, as many cultures outside of the United States do. One can travel across the more tropical areas of our world, where clothing is not necessary for survival, and see breasts, buttocks and genitalia of people of both sexes and all ages. And, “European culture equates nudity as beauty and something to be celebrated,” says model Roarie Yum.

A primary argument against posing nude is shame: that there is something inherently wrong with showing your own naked body or seeing another person’s, or that it somehow devalues the individual.

You hear it in phrases like, “You’re not leaving enough to the imagination” or “Why buy the cow when you can get the milk for free?” Well, there was once a time when showing your ankles was considered scandalous, too.

Elena Siddal, a New York based art model shared the following on her website:

“Looking at a naked body can’t tell you a person’s dreams or motivations…It only gives the barest hint of what it might be like to touch their skin, or how it would feel to hold their hand, or kiss them.”
And what that person looks like isn’t really that much different than what every other person looks like.

Another, more practical argument against posing nude is that it may have negative consequences. It’s true that just about every month there’s a new story of a teacher being fired because nude photos surfaced from their past. Perhaps if you are in or plan to go into the fields of children’s education, law or politics it may not be in your best interest to pose nude, because those fields tend to be more conservative when it comes to nudity.

However, your nudity has nothing to do with your character or abilities. Indeed nudity won’t deny you success. Marilyn Monroe had her biggest success after nude photos of her were published. Canadian model and photographer Katie West has this to say:

“I’ve been posting naked pictures of myself on the Internet for over ten years. My mother is still proud of me and my father still loves me…I still get A’s in courses I take…If people don’t like what I do, they don’t have to look at it. They don’t have to be here…I’ll be just fine without them.”

Posing nude for a visual artist is something a person has to choose for themselves. I strongly encourage everyone to do it at least once in his or her life. It offers a tremendous opportunity to feel better about your body, to better understand how bodies are portrayed in the media, and to help change the way our society views nudity.