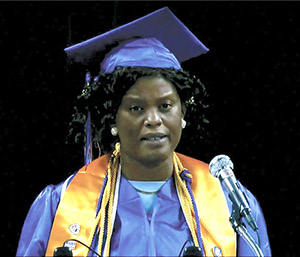 Ayele Dossavi wants us to know you can’t manifest anything into existence unless you’re prepared to work – and work hard.
Last month, the student commencement speaker captivated her audience during the Madison College commencement ceremonies. The Fall 2021 Commencement ceremony, Madison College’s first in-person graduation ceremony since 2019, took place on Thursday, Dec. 16, at the Alliant Energy Center. Nearly 1,000 students graduated.
Dossavi was one of 300 students who walked the ceremony in their cap and gown.
Dossavi, who earned an associate degree in nursing, is a mother of two and works as a community volunteer, hoping one day she’ll help new mothers as an obstetrics nurse.
She began the speech by saying she didn’t have sufficient words to communicate her gratitude for receiving the opportunity to speak to her peers during the graduation ceremony.
Quoting Colin Powell, the first African-American secretary of state, she said, “A dream doesn’t become reality through magic; it takes sweat, determination and hard work.”
The student commencement speaker felt they were connected to Powell’s quote, saying that a student’s journey is full of challenges and needs determination.
“Today, my peers and I are leaving behind our role as students. Our new vocation will be a central part of who we are in the community,” Dossavi said.
Dossavi said that college students undergo many challenges in their academic journey, including sleep deprivation, lack of support, stress and lack of social interaction.
Dossavi’s road may have begun smooth, but eventually, her path became rockier.
Dossavi is originally from Togo, a French speaking country in western Africa. The community volunteer talked about embracing healthcare after graduating from high school. She was a midwife in Togo before moving to the U.S. to join her then-husband in 2011.
But from 2011 to the present, she encountered many detours such as learning English, being a parent living in a homeless shelter, going through a divorce, losing her father in 2012, being a single mom with two kids in a foreign country and more.
“The good news is that those challenges — instead of knocking me down — strengthened me a lot,” Dossavi said.
While she has been a certified nursing assistant since 2014, her dream was to become a nurse saying, “I love to provide emotional and physical support for people.”
As a first-generation student going to college in her family, Dossavi feels a strong connection to other immigrants and had a special message for any immigrants among them. “Never think that the dream is bigger than their the ability to achieve them. Seek support as much as you can,” she said.
Dossavi was grateful for the support she received from the Retention Initiatives and Student Engagement (RISE) program, Madison College Foundation, the Academic Honor Society Phi Theta Kappa, her instructors and her peers to achieve this goal.
The community support was the foundation of Dossavi receiving her degree and becoming a nurse. She thanked the president and deans of the Madison College with a special nod to the faculty.
The instructors’ extra effort to educate their students during the pandemic wasn’t lost on Dossavi.
She thanked them for their determination in teaching the students theory and practice, believing the faculty was an inspiration to the entire student body.
“I want to encourage my peer graduates to continue to raise their head with the same determination and hard work to achieve future goals.”