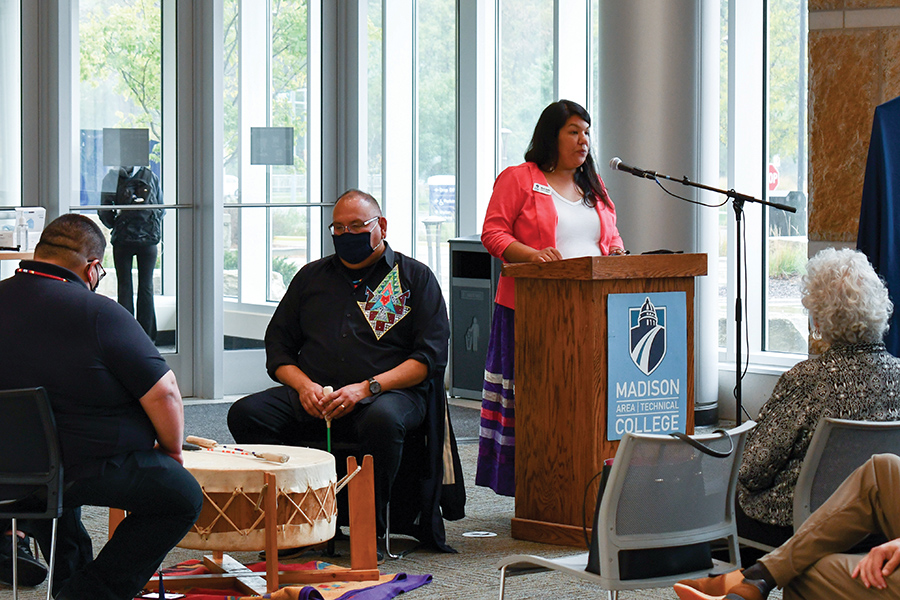 Land acknowledgement presentation was a centerpiece of the event

Nicole Soulier opened the Indigenous Peoples Day campus celebration and land acknowledgment held at the Truax Campus on Oct. 11 by recognizing her elders and thanking everyone for being there.

“I think it’s important we rethink how we collectively support Indigenous peoples with resolutions for the future,” said Soulier, the college’s community engagement coordinator. “The idea of taking a day to recognize and honor Indigenous peoples is long overdue.”

The ceremony consisted of multiple speakers, an honor song and food. A special pre-colonial meal was provided that Chef Kevin McGuinnis and his team prepared. Similar ceremonies were held at all the regional campuses.

“It’s clear that replacing the holiday known as Columbus Day with a single day to recognize and honor Indigenous peoples is a step in the right direction but it is just the beginning to building a collective resolution with action to right the wrongs that this country and various agencies have waged against its first peoples,” said Soulier. “In order to do this, we must also think and act beyond a day to recognize Indigenous people because one day does not undo over 500 years of colonialism.”

In years past, the Native American Student Association and the Student Senate emphasized the importance of recognizing the land. A resolution at that time was put forth to honor and recognize Indigenous Peoples Day instead of Columbus Day.

Due to COVID-19, there were some difficulties in getting anything official done.

“We’re finally unpausing. We said, no matter what, even if we had to do this virtually, we were going to continue to make sure that the work that goes beyond just an unveiling of the land acknowledgment,” said Lucia Nunez, Vice President of Equity and Inclusion and Community Engagement.

After going back and forth with members of the Ho-Chunk Nation with three different versions of statements, a final statement was arrived at in 2019.

Madison College President Dr. Jack  Daniels covered some of the history and facts regarding Indigenous peoples in the United States then specifically in Wisconsin. After covering the history he noted that “Understanding the history compels us to think about the future.”

After the uncovering of the plaque that will be featured, an honor song was played by Ho-Chunk relatives.

“The drumbeat recognizes the heartbeat of Mother Earth and it comes from the root of who we are. We use it in prayer, ceremony and celebration,” said Soulier.

The songs talked about loving one another and a travel song about going back home.

Ongoing displays will be shown at all the campuses to remind the college community of the history regarding Indigenous people and the land.

“It’s a great day to be Indigenous,” said Katie Ackley, Program Advisor for Equity and Inclusion.