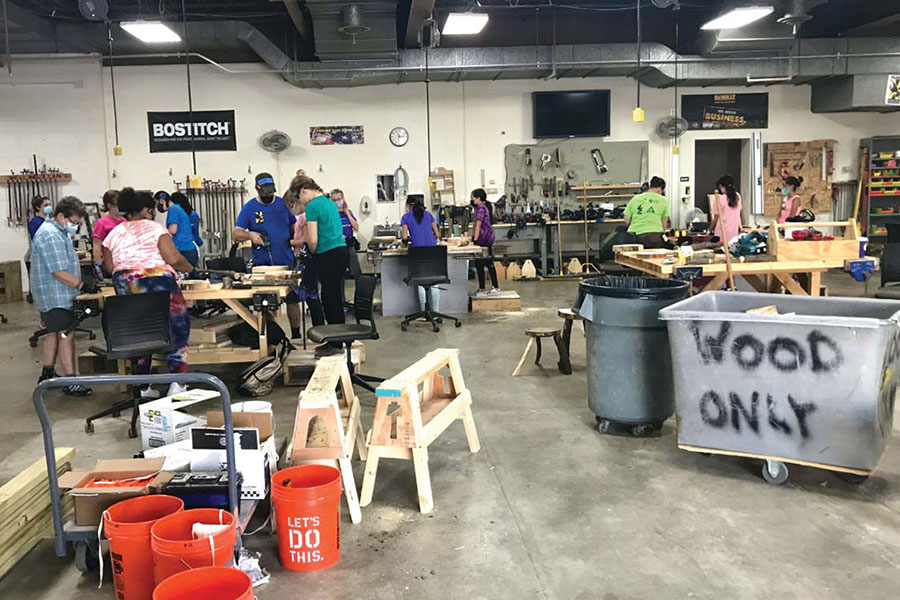 Young women in the CampBuild program.

Power tools and safety glasses were found at the Commercial Avenue campus over the summer. While this isn’t out of the ordinary, it was the people using them that made it special.

CampBUILD trains girls to thrive in a construction environment. The event was hosted by Madison College in partnership with the Girl Scouts of Wisconsin Badgerland. Each session focused on different skill sets for the varying age groups.

“I’ve really worked pretty diligently to get involved in things that provided opportunities for women and other underrepresented folks in the skilled trades,” said Sandra Thistle, a construction and remodeling instructor at Madison College.

“I really feel strongly [that] giving the opportunity to the girls at an early age normalizes this industry and makes it accessible like no other way can,” she went on to say.

The idea of CampBUILD has been on Thistle’s mind for a while. The trades, she notes, are an industry dominated by white men, and she has been trying to pave a pathway for other folks to find the industry and get in.

These efforts, according to her, have been to greater and lesser success. However, she says that this program is essential in making the trades more accessible.

This year, some of the activities included building wooden stools and birdhouses. The high schoolers got to pour concrete slabs for their three legged stools, while the younger group’s stools were entirely made of wood.

The cost of camp varies per session length. Half days were $25, full day sessions were $35, and two day camps were $75. Costs help cover materials and t-shirts.

The program is branched from a larger program, CampHERO. While CampHERO focuses on teaching girls about EMT, fire and police services, CampBUILD’s focus is introducing girls to the trades.

Another way that the program was made accessible was by offering it during a high point of the pandemic. Materials were sent to participants and instructions were given via virtual meetings.

For the younger age groups, there was an ongoing session while the older groups had check-ins at various times.

“Regardless of whether they choose it as a career path, developing a comfort with power tools and a knowledge about how to use them serves almost everyone…well, unless you’re really, really wealthy and can hire people for everything,” said Thistle.