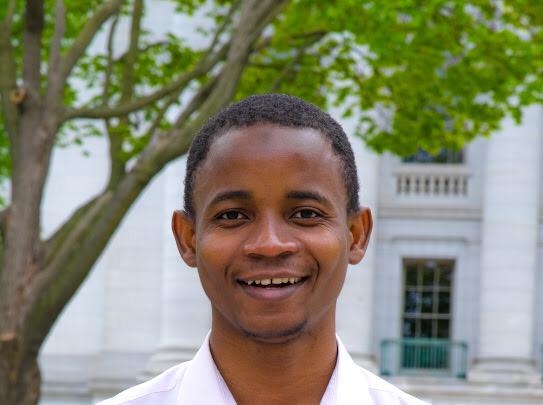 An international student, Sawadogo, first came to Madison from his home in Burkina Faso through a scholarship he earned from the non-profit Leading Change – Africa back in 2018. The organization is led by a man named Ousmane Kabre, who was once an international student himself at Madison College, and went on to earn his bachelor’s in business administration and master’s in accounting at UW Madison.

“I was lucky to be the first student to receive that scholarship, and they brought me here as an international student. Beyond the scholarship, they are also following up with us. We have a program, certain assignments we need to complete, such as reading books, listening to lectures, speeches that we need to present. Personally, I was doing a presentation each month,” said Sawadogo.

When Sawadogo first arrived in Madison, he worked hard to learn English, as he grew up speaking French. He attended the same institute as Kabre for his lessons.

“I was learning English for a year at WESLI, it’s called, Wisconsin English Second Language Institute… So, I took those English classes at downtown Madison and after the program was over, I took a program in teaching.”

It did not take Sawadogo long to become proficient with the English language. In fact, he was good enough that he went on to be able to teach using his new skills less than a year after arriving in the city.

“And how ironic it is, you came to learn English, and now you want to teach English. And I took that program while I was waiting to start at Madison College, and I taught a class … and it was just a phenomenal experience for me as an instructor.” Sawadogo also continued using his teaching skills as a volunteer for the Literacy Network for a time before starting school.

Currently in the Liberal Arts Transfer program since the fall of 2019, Sawadogo has plans to transfer to a four-year college in order to earn his bachelor’s and master’s degrees in electrical engineering, aiming for UW Madison. While his educational journey has similarities to the founder of Leading Change, Sawadogo has already started to make his own path.

“The number one reason for going into electrical engineering as a major, is in the long run to be able to help create innovative and practical ways of generating energy, which is solar power.”

“More specifically to use that solar power to practice agriculture in Africa. My home country being Burkina Faso, West Africa, we have limited access to water and therefore farming is really challenging. So, the goal is to use solar energy, you know, to provide those basic needs that we need back home.”

Sawadogo takes his schooling seriously, but he still finds that he has the opportunity to become involved in activities outside of his education. Working at the Student Achievement Center as a Mathematics and Chemistry tutor, a writing tutor at the Writing Center, a student leader in Student Life and the office manager of the Volunteer Center, and a STEM club member, Sawadogo is not short on extracurricular activities.

“I see school as the number one thing on campus. Even though school is number one, I still feel I have more time to give to the community. Like, the Volunteer Center is not a requirement to graduate, or a requirement to transfer, but I see it as an opportunity for me to grow as a leader. To develop certain skills I will need in the real world.”

Not only working within organizations, Sawadogo has made plans of his own that have come from his experiences and goals. Through the Volunteer Center, he attended the Impact Conference in Arizona, where he was able to attend a program on Sustainability strategies for businesses. Sawadogo was also involved in the Madison College Challenge, a competition in which participants present a business idea and are coached by the Center for entrepreneurship at the college. At the end of the competition the projects are evaluated, finalists are chosen and advice is given.

Due to the COVID-19 pandemic it was a bit restrained, everybody in the program took a class and the group of business ideas that entered narrowed down to nine teams. Within this program, Sawadogo worked on his own business idea.

“Learning Center International, which is an e learning platform … It would be a competitor of Khan academy, like a resource, static resources. Also, a tutoring platform, where you can request a tutor in person, online that is, one on one. There will also be online courses like Udemy.”

Already working on furthering his business plan since his project made it to the finals, Sawadogo has been researching ways to make his idea a reality and take it even further.

“The new component … will be incorporating collaboration between students, which is student to student learning, by themselves.”

“That is based on the knowledge that, me as a tutor I know that sometimes peer tutors can do better than instructors. In terms of, sometimes there is a stigma, and a barrier between instructor and student. So, having students between themselves be able to support each other, explain things to each other, that can help the students.”

Sawadogo hopes to bring this idea to a global audience, though for now he is looking at starting in America and Africa.

“I was just a tutor, not a businessman, but now after that program it has motivated me. It has inspired me to want to search more into how do we start a company, and how do we make sure we don’t let the dream fade. In terms of progress, right now I am working on the technical part of it, and I am hoping that by graduation I will launch and maybe start testing at Madison College. Be ready to see how it goes in the real world.”

As a result of Sawadogo’s growing list of accomplishments and his hard work, he has received several awards and acknowledgements. Most recently, Sawadogo was awarded both the Coca-Cola Leaders of Promise and UW Credit Union’s Community Values Scholarships this last semester.

Thinking on the greatest influences towards his ability to accomplish these achievements, Sawadogo said that the biggest factors were his involvement with Leading Change, and the support of Volunteer Center Advisor Breanna Stapleton-Welch, as well as his Intro to Engineering Professor Jacob Eapen.

“The advisor for the volunteer center is really supportive, in my opinion. She’s always been the one who would ask about how school was going. It’s like she knows, when we are struggling, or you know she would always ask things are going and I would share with her if I need help,” Sawadogo shared regarding Stapleton-Welch.

Speaking of his time with Jacob Eapen during his first semester, Sawadogo said the professor was “a typical community college instructor, and by that I mean, what Madison College is known for. Being supportive outside of classes, and of course his class was fantastic too.”

“Having that environment of people who are not only just transactive, focused on the activity, but who are also focused on you as a person. I think that helped me succeed in school and as a student leader.”