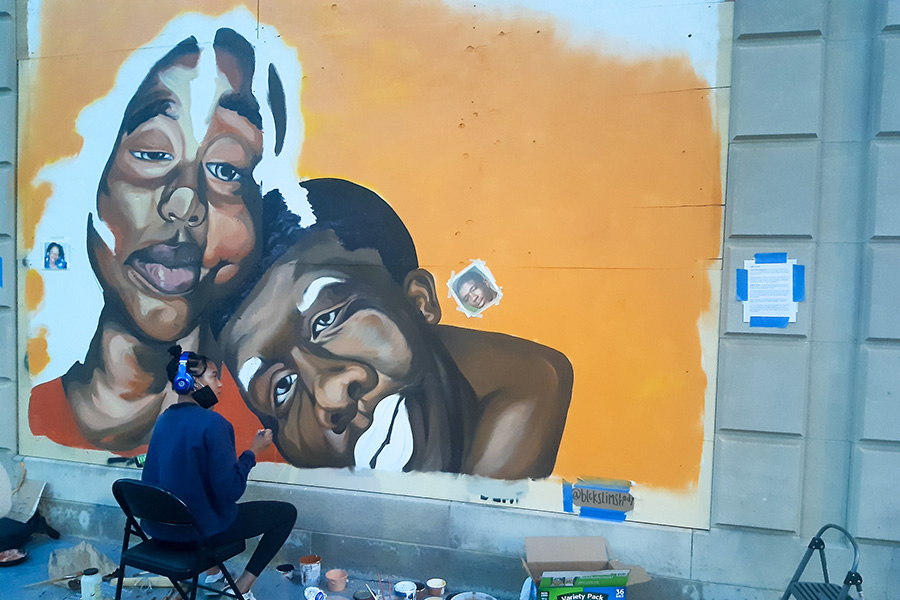 Artist Shiloah Symone Coley while working on the mural which now stands on N. Fairchild St at the side of the Overture Galleries building. Her art is inspired by Aiyana Mo’Nay Stanley and Cameron Tillman who as children were murdered by police forces and stories went untold.

Since May 31, as a part of the peaceful protest of the Black Lives Matter Movement, art has stood along the streets of Downton Madison. This initiative was developed by Madison Arts Program Administrator Karin Wolf, who extended an invitation to local artists to express their feelings and ideas on the movement as well as being a way to aid them throughout the pandemic.

Now that restaurants and shops have resumed their activities as COVID-19 restrictions begin to loosen, these murals are being removed and face an uncertain fate.

A flyer has been spread across the streets where the murals stand. This poster brings to attention the idea of opening the first George Floyd museum here in Madison, which would possibly become a way to shelter the artwork.

The responsibility of this project rests on the same individual who has outlined a proposal of a Museum Mile downtown. According to the Museum Mile website, a letter has been sent regarding these proposals to the Wisconsin State Journal, yet there is no trace of other measures made to pursue this with the correspondent officials.

“There is danger into focusing just in one figure since there have been so many victims who have suffered from police brutality,” Shiloah Symone Coley, author of the mural on North Fairchild Street tells us. Still, no matter what form it takes, she would like to see a space where people from the BIPOC community can receive assistance as well as serve to educate and provide information.

For the moment, although there is no more information regarding the future of this museum or the Museum Mile initiative, there is still a plan to keep the art of the Black Lives Matter movement alive.

The Madison Arts Program has continued working on options to find the best outcome for the project. The artists, as well as the public, have submitted their own ideas as to what can be done; it’s an array of possibilities from being a temporary exhibition to the art being auctioned to raise money.

In Coley’s opinion, if her work was auctioned off, she would like the money to be used to support the homeless in Madison. “Specifically, Black and Brown folks, the low-income community that largely gets overseeing and sidestepped.” However, she is open to different ideas as long as the city remains honest and communicative with the artists.