Spring into the season with e-bikes 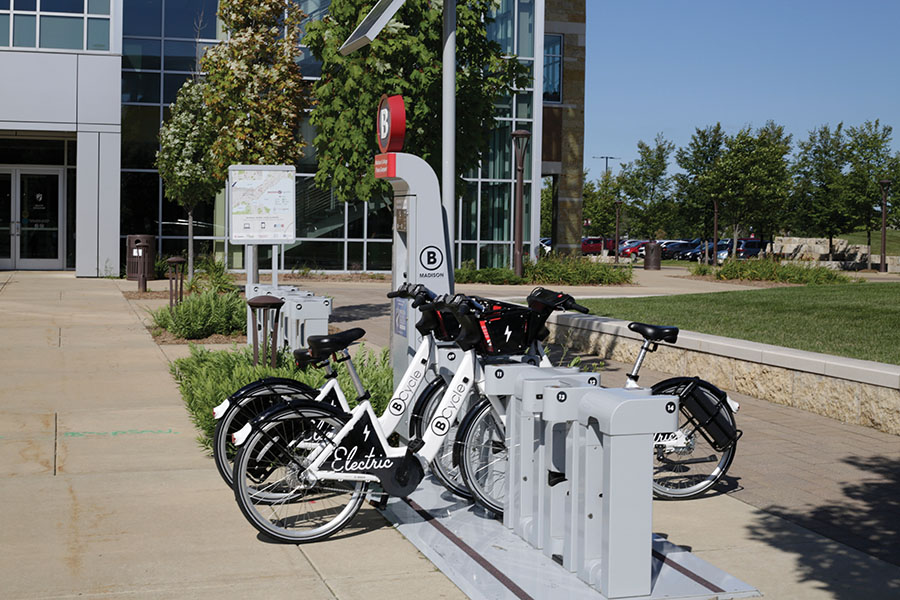 The BCysle station at Madison College's Truax Campus will re-open on March 15 with a full set of e-bikes.

With spring just around the corner, Madison College is getting in gear for the arrival of Madison BCycle to hit the streets. With the re-opening date of March 15, BCycle’s new hit, the e-bike otherwise known as “electric bike,” will be available to all students and faculty members.

E-bikes give users a friendly, secure and easy mode of transportation. With its automatic pedal assist feature, it eases your journey on wheels. By using BCycle’s mobile application you can track your miles, calories and carbon offsets for each trip you take. Being a member of Madison BCycle does have its responsibilities. Like having to check in your bike every hour to a station for re-use and if needed recharge. The college’s BCycle station is located by the Health Education Building.

“Lots of people haven’t been on an e-bike yet, so it’s a great thing to just give it a try,” encourages Jacquelyn M. Dahlke, Transportation Program Analyst at Madison College.

Madison BCycle has created a massive incline of cycle use since their launch of electric bikes on June of 2019. According to Lisa Snyder, Executive Director of Madison Cycle, “In 2019 electric bikes more than doubled the number of trips from the previous two years combined at over 231,000 trips.”

When Madison College’s Student Senate held a launch party in the fall of 2015, BCycle became a part of the campus. The use of such transportation brings the college closer to its Madison community.

The 2019 annual report on Madison College’s use of the BCycle’s shows the impact this type of transportation has had on the campus. Madison College members have biked 7,066 miles, burned 281,156 calories, and have reduced the city of Madison’s carbon footprint by 6,716 pounds which compares to 140 trees planted and gallons of gas saved, 342 gallons to be exact.

Not only is BCycle helping with the environment and the health of the community, it also tends to provide a sense of freedom.

“When we get on a bike, it kind of brings out the little kid in us. There’s that something freeing about it. You’re happy that you did it for yourself. You look around more. Get some fresh air. You see something you didn’t expect to see. You’re moving a little more slowly. There is so many wonderful things about it,” said Dahlke.

With the help of the e-bikes being introduced last year there was a 131 percent rise of annual passes purchased by campus members compared to 2018. It helps that students and staff get an advantage over regular Madisonians. Instead of the general $100 annual fee, Madison College students and staff can purchase an annual membership for just $30.

If members are interested in this discounted pass all they have to do is visit www.madison.bcycle.com and plug in the promocode: MATCSTUDENT or MATCSTAFF along with your student email.

“Madison is the first system in the country to fully convert to e-bikes, and already the upgrade has driven a record-breaking year of ridership,” Snyder claims on the Madison BCycle 2019 Annual Report.

With that being said, last year in August and September the bikes were at their highest point of use at Madison College. The return of the bikes this coming month will likely lead to even more use this year.