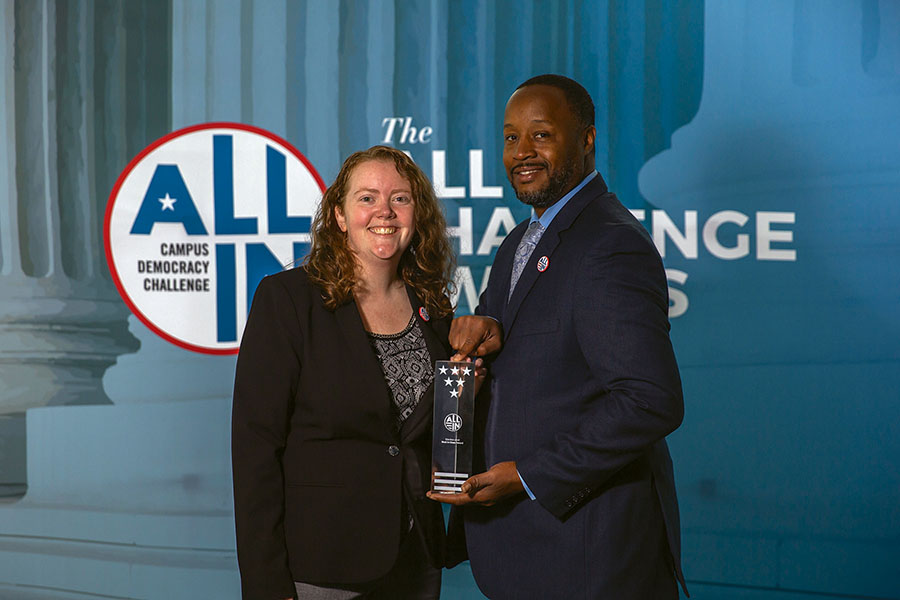 Senate advisor Ellie Rome, left, and Dr. Howard Spearman, Vice President of Student Affairs, accept an award on behalf of Madison College from the All In Campus Democraty Challenge.

Madison College received an award for student voter participation from the ALL IN Campus Democracy Challenge at their award ceremony in Washington D.C. on Nov. 12. Madison College was given the Best In Class Award for two year public institutions, which was received for having the highest voting rate of all the eligible schools during the 2018 midterm elections.

Beating out 21 other institutions, Madison College’s voting rate was 53.5 percent for the 2018 midterms. This was an increase of 12.1 percent from the voting rate that was recorded in 2014 for the college. Nationally, the voting rate for college students was 19.7 percent in 2014 and 39.1 percent in 2018, according to a study by Tufts University. Madison College has maintained it’s record of exceptional voter participation, marking the institution as an award worthy outlier.

This jump in voter participation is thanks to many groups and individuals at Madison College who worked to get students registered and help them vote early or at the polls on election day said Ellie Rome. Groups like Black Student Union, Student Senate and The League of Women Voters worked to help students register early and encouraged people to vote.

Rome said that this award is “motivating us to try even harder in 2020.”

Madison College is going to work to increase voter rates again by allowing people to vote early at events at the Truax campus or at Goodman South. Through working with the Clerk of the City of Madison, people will be able to register and vote early. The first of these events will be on Feb 10 through 15.

Rome said that, in the past, “we talked to a lot of students who had not registered to vote, but were excited to be prepared for that.” Rome said that their enthusiasm was encouraging at past events to promote voter participation.

Rome advises that even if you have voted in the past, it is important to make sure that you are ready to vote in the upcoming elections. If you have moved recently or other personal details have changed, it might be necessary to update your voter registration. You can do this in person at the polls in Wisconsin, as long as you have proper identification with you and potentially a proof of address. If you are unsure if you are all set to vote, visit MyVote.WI.gov and check your status.

Rome is organizing more voter registration events, and wants students and others to keep encouraging others to vote and maybe even reach out to Madison College if they have an opportunity to help their efforts to increase voter participations.