Dr. Yusef Salaam is a faithful Muslim, criminal justice activist, and author. Dr. Salaam is revolutionary, not only for his story but, because of how he continues to fight for justice of young people of color in a spiritual battle. You may know him from the story of the Central Park Five, but they have reclaimed their identities and call themselves the Exonerated Five. 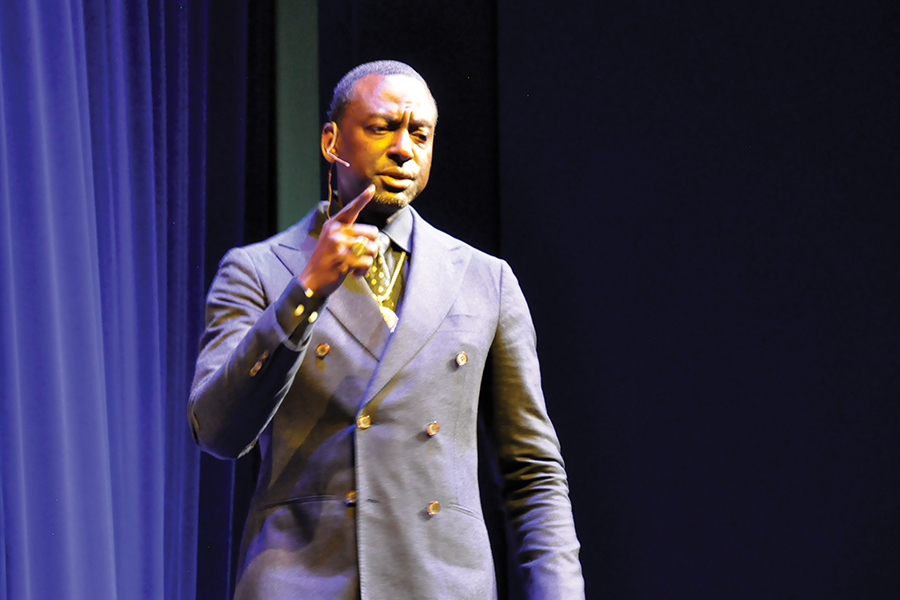 Madison College had the honor of having Dr. Yusef Salaam come and talk about his story and how he managed to live this struggle of being accused of a crime that he did not commit.

For six years and eight months Dr. Salaam was incarcerated and let out on parole. About six years later the real rapist admitted to the crime and all five of the men were exonerated.

Getting accused of something so serious at such a young age is terrifying for 14 and 15 year olds. Dr. Salaam and the other four young men at the time were being interrogated for hours at a time, but were never asked questions about who they were, or where they came from.

Dr. Salaam sees that in this society we criminalize the youth, and specifically the black youth. “Misidentifying people based on the color of their skin, as appose to what is on the inside of them,” Dr. Salaam stated.

Around the nation and even around the world Dr. Salaam points out that there is a narrative and a story for a certain group of people, and this can cause injustices to happen like what happened to him. “I think race played 1,000 percent,” Salaam said, bringing attention to the unfortunate biases that are placed on people of color.

Race is not the only factor to Dr. Salaam though, he sees evils that need to be brought to attention too. He states “the true battle is not about black and white, it’s not really a fight against black people and white people. Really it’s about making sure that the evils that we see in the high and low places are stomped out.”

To see a progressive society is not dividing us between our skin color but as Dr. Salaam believes, it is noticing a societal evil and speaking up about it.

Throughout his experience he really focused on the blessings he had, and being thankful to wake up every morning. Going through something so traumatic is hard, but he saw this, as he went into adulthood, as an opportunity for society to learn from the case and debrief on it to see what changes need to be made in our justice system.

These young men got strength from this experience, and were not broken down by it. Dr. Salaam went through serious trauma but continuously recognized who he felt was sent to him as blessings.

On his 21st birthday, he was moved from juvenile detention to prison and he was terrified. But this didn’t stop him from having faith.

He got pulled aside one day as he was outside on the prison field. Salaam was scared and thought this was when he gets beat up. Fortunately, he came across members of the black panthers and they told him they are here to help and protect him. They told Salaam “if anyone mess with you, tell us and we’ll take care of it.”

Dr. Salaam also came across a good soul, a woman who worked for the prison would come and leave him treats. He asked her why, and she told him “Yusef, I know you don’t deserve to be in here and if there is anything I can do to make it a little easier I will.”

Dr. Salaam knew from the people he met and the experiences he got that God was and is on his side.

While Dr. Salaam was incarcerated, he took time to study religion. He came across the story of Joseph and he started to realize similarities in his life to the Bible story.

Joseph was accused of raping a woman and he goes to jail, but he was falsely accused of it. He took punishment rather than doing something he felt was unethical.

Yusef never confessed to doing the crime, but he was accused and spent a significant amount of time in jail. He knew that telling his truth was his freedom. Salaam was once told “It’s not what you go through, it what you grow through.”

So Dr. Salaam continued his studying and his faith grew stronger.

He speaks that he was so fortunate because he brings up Korey Wise and how traumatic his experience was compared to his. Salaam recognizes how significant Wise was to their story and how it made his faith even strong. “If it was not for Cory Wise, I would not be standing here in front of you all today.” Salaam states. Wise’s strength changed everything.

The exonerated five fought for their truth to be heard, and Dr. Salaam praises how Wise continued to only speak if his truth was willing to be heard.

Life after this traumatic experience has only made them stronger and closer. The public knew that they did not know each other, but after their exoneration they grew closer. Salaam says “we have a tremendously sacred relationship.”

After going through this long process and sharing their experiences, they just assumed their lives looked exactly the same. But when they finally were all together and actually talked about their stories they realize that each of them experienced something a little different, but Cory Wise made things even more incredible of a story.

Dr. Salaam has found his voice, and his purpose because of this, and though it was traumatic and life changing, he is thankful for who he has become.