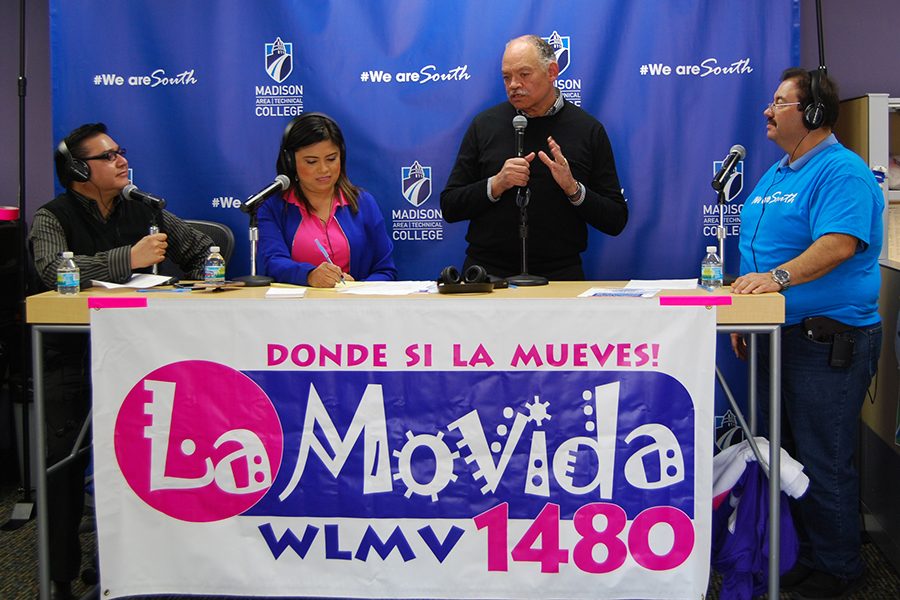 Madison South Campus had a fundraiser on Friday April 20 to help raise money for the construction of a new South Campus. To help fund raise, the college had the Spanish language radio station, La Movida, do a live broadcast.

The small library of South Campus was turned into a radio studio for the day, as microphones and broadcasting equipment were set up near the library entrance.

From noon to 6 p.m., the radio hosts of Lupita and Luis Montoto invited a number of “guest celebrities,” as Associate Dean Tina Ahedo called them, to come on the live show to speak about why it’s important to donate.

The celebrity list included names like Dane County Executive Joe Parisi, editor for the Capital City Hues Jonathan Gramling, and Madison College president Jack Daniels, along with many other supporters from around Madison. Gramling was one of the first ones to donate. “This campus is very important… whatever people give is important, whether it’s one dollar or five dollars,” said Gramling while on the air.

La Movida was a natural partner for the fundraiser. La Movida has been hosting a radio show where people from South come on and let the Spanish speaking community in Madison know what’s going on with Madison College.

The hosts of the show, Luis and Lupita Montoto, spoke about how they felt on partnering up for the fundraiser.

“This is wonderful for all the families and mostly for this side of the city south side of Madison is an important venue that connects the whole city. It’s great to have a new Madison College on the south side,” said Lupita Montoto.

Around $2,500 dollars was raised during the fundraiser and all the money will be matched and go toward toward the Madison College South Campus building fund.

Every person that donated will be recognized at the new South Campus in some form and Daniels spoke about the importance of doing so.

“This college is going to be seven days a week, it’s open to the community for meetings, for events, those things that bring the community together, that’s why it’s so important for you to have ownership within our college,” he said.

Ahedo said of the fundraiser “it’s a solid start for a grass roots effort.”