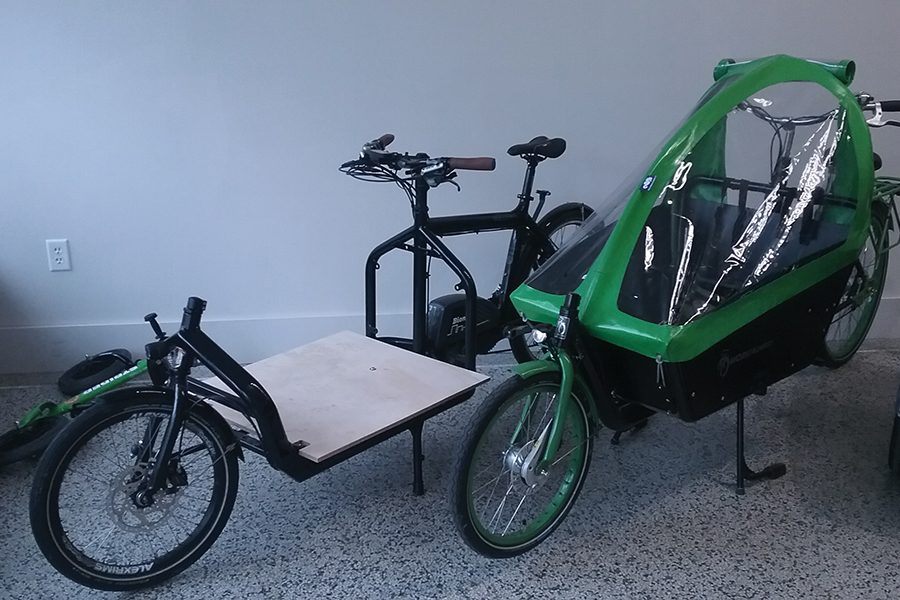 Every morning, Tim Staton loads his young daughter into the box on the front of his bike and takes her to daycare. If it is raining, snowing, or cold, he adds extra blankets to bundle her up and secures the plastic covering. She is safe and warm inside a pod as they travel along Madison’s bike paths, talking, singing, and playing games as they go. If needed, Staton can easily add groceries, a friend of his daughter’s, supplies for his business, or anything else he needs for the day.

Bikes are no longer made simply to power a rider from Point A to Point B. As cargo bikes gain in popularity, bikes can now be seen hauling kids, groceries, furniture, plants, and even significant others along Madison’s bike trails.

As Staton, owner of The Cargo Bike Shop (1404 Williamson St.) says, “We use the bike as a date machine all the time. (My wife) was very skeptical the first time we went . . . It was our anniversary, so I told her to get in the damn bike! And she loved it. She can wear fancy clothes and have a few drinks.”

Bikes have long been used in other countries as the primary method of transportation used to haul goods, serve as taxis, visit neighbors, and get around. In the United States, the car long ago took over this duty, relegating bikes to something used solely for leisure on the weekends. As bike infrastructure and design steadily improves, many people are seeking to make lifestyle changes and re-incorporate the bicycle into their daily routines.

Because most bicyclists can make do with panniers, milk crates, or even a trailer the vast majority of the time, the cargo bike market remains relatively small. Staton estimates that there are about 100 cargo bikes in Madison, 80 percent of which have been purchased by families to make running errands by bike with kids easier and more functional.

Cargo bike enthusiasts pedal all manner of different bikes around, from bikes with boxes on front, bikes with long tails, bikes with covered pods in the front, and everything else that the developers can dream up. This leads to “questions, cheers, hoots and hollers” according to Staton.

All of the interest and attention Staton garnered while riding around town led him to quit his job at local bike carrier manufacturer Saris and open up his garage as a cargo bike shop. As business spread through word of mouth, Staton eventually opened up his Willy Street storefront in December 2016.

While Staton admits there is a learning curve to riding the bikes, especially balancing the weight of a front-loader, he also says he has not met anyone who is unable to get on and ride it within a few minutes. Staton welcomes newcomers and people who are just curious about the bikes to stop into The Cargo Bike Shop and take a test ride.

“Even if you don’t need one, come check it out so you can see what they can do. I encourage anyone who is a cyclist to try one so they know what is out there.” He guarantees that people will walk away from the test ride with a smile on their faces, saying, “Man, that was fun!”

For those who are serious about buying a cargo bike, the bikes are a major investment, yet, Staton believes the bikes are “definitely here to stay in Madison.”

First of all, many people on the isthmus do not have garage or parking spaces to accommodate multiple cars. Secondly, Madison is well-known for its extensive network of trails, which are necessary to provide incentives for families to transition to cargo bikes.

As Staton notes, “People need to feel safe and comfortable about riding, especially because it’s a lot of parents with kids. They are not the hard core Lycra-crowd, comfortable with riding while cars fly by three feet away.”

Making the choice to adopt a mostly car-free lifestyle can really improve health and lower stress. As Staton says, “It is such a great, low-stress way to get around. It’s practical. There are very few things I can’t do with one. I can get on my bike and not have to deal with traffic or parking.”

One thing that will help cargo bikes become more popular is that more bikes are coming with integrated pedal assist, another name for a small electric motor. These motors are normally battery-powered and can be recharged in a matter of minutes with very low energy input. Some cycling enthusiasts think of this as “cheating,” but the pedal assist allows people to truly replace their cars.

Staton calls this technology a “game changer.” Cargo bikes are much heavier than regular bikes to begin with so that they can support weight, plus the rider must factor in the cargo weight.

Even though Madison is mostly flat, the pedal assist comes in handy for big jobs such as hauling 400 pounds of water softener salt (which Staton once did), multiple kids, furniture, or other very heavy items. “People come in with some really unique quandaries and we get to try to solve them!” Staton says with glee.

As the technology, materials, and designs continue to improve, Staton would like to see cargo bikes included as “part of a sustainable transportation solution.” He envisions a world where farmers get around their farms, visit neighbors, or even haul goods to markets via bikes. Cargo bikes can even be adapted to help people of all abilities cycle as a primary means of transportation.

Staton and other cargo bike enthusiasts believe that current designs have only begun to scratch the surface of what these bikes are capable of doing.