Power of the press highlighted at White House 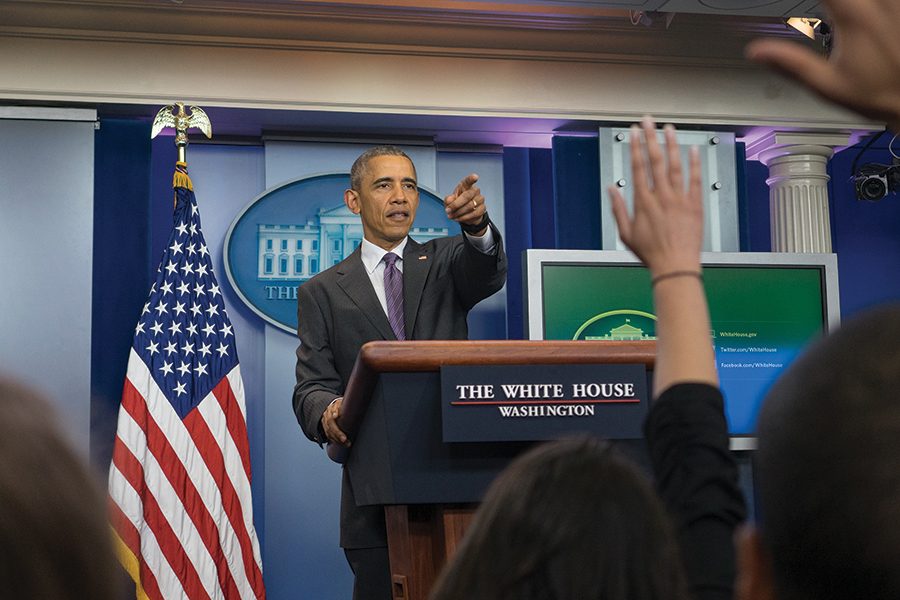 President Obama answers questions from student journalists in the White House press briefing room. The students, including Clarion Managing Editor Josh Zytkiewicz, were there as part of the first ever White House College Reporter Day.

Instead of NBC and The New York Times, the journalists filling the 49 seats of the James S. Brady press briefing room were from such diverse publications as the Kingsborough Community College Scepter, The University of Southern California Daily Trojan, and the Madison College Clarion.

The President began his briefing talking about education and his nomination of Merrick Garland for the Supreme Court.  He then moved on to speak about the importance of journalism.

“What separates us out in part from a lot of other countries in the world is we’ve got this incredible free press that pokes and prods and calls into account our leaders,” he said. “And that is how we can make sure that leaders are accountable to the people who elect them. And that’s how we make sure that you don’t see major abuses of power. And when you do, that, in fact, the American people know about it and are able to make changes.”

The first question from the students came from Dan Corey, of the Daily Targum at Rutgers University, who asked the president for an interview.

“That’s a good use of your time right there,” the President said in response.  The President is scheduled to speak at Rutgers’ commencement ceremony in May.

“I have to say that normally I coordinate carefully with my press team before we grant interviews, but I am favorably disposed towards giving you a little bit of time,” Obama said.

After taking questions about such varied topics as the Flint water crisis, Syrian refugees, Pell grants, and his proudest achievement (his daughters) Obama’s longest response was to the final question of the day.

Patrick Forrest of the Fresno City College Rampage posed a question about revitalizing the “faith in democracy that seems to be lacking.”

The President’s 11-minute response touched on gerrymandering, campaign finance, the role of journalism and the lack of voting among citizens, especially young people.

“So don’t let people tell you that what you do doesn’t matter.  It does.  Don’t give away your power.  That should be the main message that you deliver all the time.  And it doesn’t matter whether you’re a Republican, Democratic, independent; whether you’re conservative on some issues, liberal on others.  If you participate and you take the time to be informed about the issues, and you actually turn out and your peers turn out, you change the country.  You do.  It may not always happen as fast as you’d like, but you’ll change it,” said the President.  Ending with “You got me started.  I went on a rant, didn’t I?”
Just before leaving, Obama said, “The good news is, is that there are no challenges, as JFK said, that ‘man creates that man can’t solve.’  I would add women to that.”

The event was held in conjunction with the announcement of various programs focused on college students.

These include the new StudentLoans.gov/Repay website from the Department of Education and the President’s goal to enroll two million borrowers in the Pay As You Earn student debt repayment plan.  The PAYE plan is an income-driven repayment plan that caps student loan payments at 10 percent of a borrower’s income.

Also highlighted was the “It’s On Us” campaign to end campus sexual assault.  “It’s On Us” was started in 2014 as a way to engage college students to do their part to end sexual assault.  According to Valerie Jarett, Senior Advisor to the President, one in five women are assaulted in college and most assaults occur in the first few weeks of freshman and sophomore year.

“It’s on us is really the rallying cry to bring everyone in,” said Kyle Lierman, senior policy advisor.